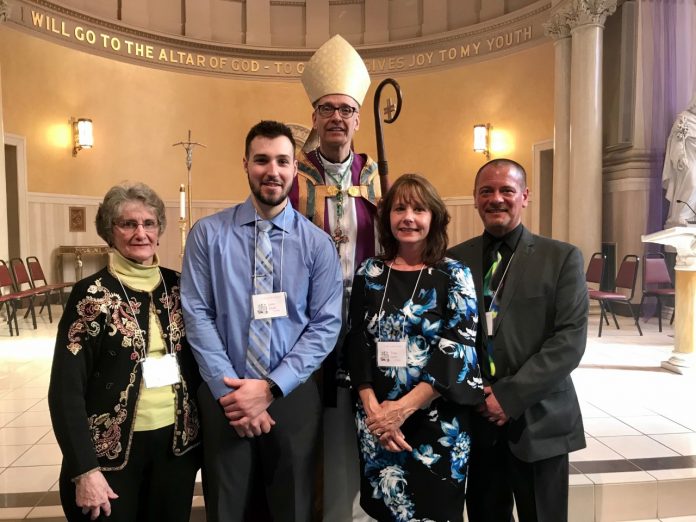 A phone call nearly three decades ago began a journey for Tracy Smith that culminated this past summer.

Smith, who was raised in the Lutheran tradition but was married in the Catholic Church, contacted Saint John Gualbert Cathedral in Johnstown with an important inquiry.

“What do I need to do to have my baby baptized?,” she asked the priest who answered the call.

“What if I’m not Catholic?,” Smith also posed.

“I don’t mind if you don’t mind,” the priest responded.

“That alone was what welcomed me into my Saint John family 28 years ago,” Smith said.

Over the years, Smith accompanied her family to Mass at the Cathedral. Her bond with the Catholic faith strengthened, and she increasingly weighed the idea of converting.

So after three decades, why now?

“I would say it was just time, and that’s what I told Father Crookston (Rector of the Cathedral),” Smith admitted. “You know when it’s time, and by the grace of the Holy Spirit, it proved that it was time. I don’t have any other answer as to why.”

Her future son-in-law was perhaps one factor that nudged Smith to begin her formal formation. He was beginning preparation for Confirmation, and Smith decided to join him.

Her worries about the time commitment were quickly put to rest.

“As we went through the classes, Sister Honora (parish RCIA Director) and Saint John Gualbert made it very simple,” Smith admitted. “We had our classes right before Sunday Mass, so we were already there. If there was a class we couldn’t make, we were able to make up that class one-on-one with our instructor. It was a relaxed setting. The process was simple. It broke down every barrier in my mind that stopped me from doing it in the past.”

Adding to Smith’s long trek to the Catholic Church was something she never would have predicted at the beginning of the process.

Instead of being initiated at the Easter Vigil as planned, Smith and other candidates and catechumens throughout the diocese were forced to wait since public Masses were not being celebrated in the early weeks of the pandemic.

“It was heartbreaking to see that everything in our society – including the Church – was being put on pause,” she recalled. “I kind of joked because I said it took me 31 years to get here, we’re not going to let this stop us now. The brakes were slammed on us, but it didn’t stop us.”

When public worship resumed in mid-June, Bishop Mark directed pastors to celebrate the sacraments of initiation as soon as possible. Shortly thereafter, Smith’s wait came to an end.

“Wow, I finally did it,” she recalled thinking during the Mass at which she entered full communion in the Church. “It was a very good feeling.”

For some time, Smith has assisted with the live TV Mass broadcast at Saint John Gualbert Cathedral, which airs every Sunday at 11:00 a.m. on WATM ABC 23. She is usually the audio operator for the broadcast, and she assists with audio for concerts at the Cathedral.

She plans to continue that important ministry and is open to other opportunities to contribute to the life of her parish.

Until then, Smith is savoring her new relationship with the Church.

“I always had in my mind that I didn’t need any more than what I was getting,” she confessed. “I was fine to sit there. I was at peace with myself. I was at peace with God. But once it finally happened, the feeling was just exuberance – something beyond what I could have imagined.”

And she is surely glad she made that phone call 28 years ago.

[Photo: Bishop Mark poses with Tracy Smith (second from right), her husband, Russ, on the right, her future son-in-law Jason Edsall and his grandmother and sponsor, Joann Valsilko. The photo was taken at the Rite of Sending on March 1, 2020.] 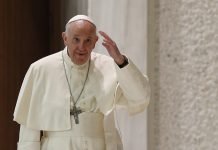 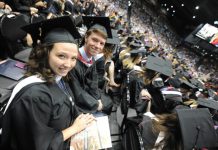 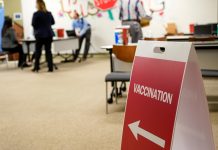 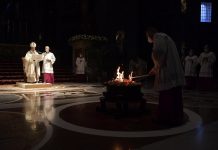