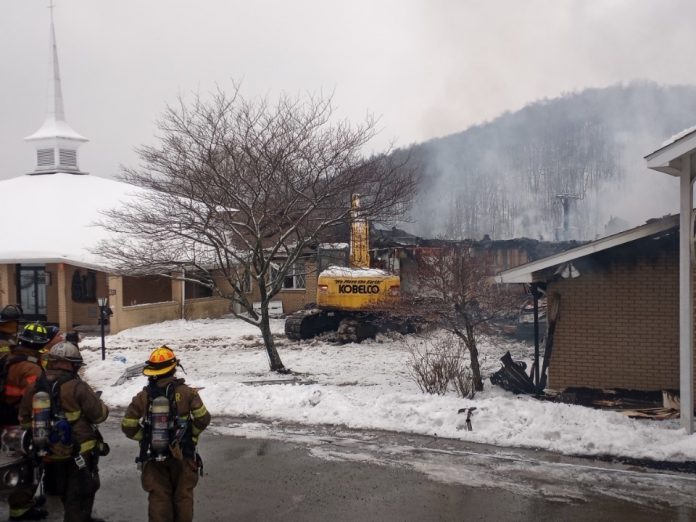 Eileen Bohensky chokes up when she recalls the morning of February 19.

She attended daily Mass at her beloved parish of Holy Family in Hooversville, something she has done regularly since public Liturgies resumed last summer.

“I loved the fact that I could receive Christ every day before I went to work,” she said. “That was such a blessing.”

Little did she know when she walked out of Holy Family that morning how much things would change. 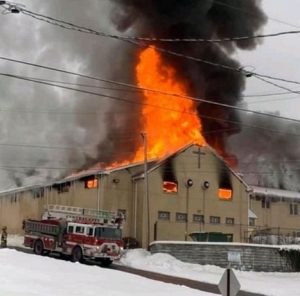 Not long after arriving at her place of work, which is near the church, a colleague said he saw smoke coming from the parish complex.

She immediately went to the scene to witness the horror unfold.

As she was trying to digest what was happening, she found comfort when she heard the church bells play the familiar song Come Holy Ghost.

“That was such a wonderful sign,” she stated. “I knew God was with us, and I know God has something planned for us, and it’s going to be good.”

The blaze destroyed the rectory and social hall, both of which were connected to the church.

Firefighters strategically prevented the flames from spreading to the worship space by cutting vents into the roof.

Because utilities to the church ran through the social hall, the church still does not have any electricity, heat, or running water, said Bob Sankey, an insurance consultant for the Diocese of Altoona-Johnstown.

Sankey has been on scene in Hooversville regularly since the fire, and also noted that the trenches firefighters dug to prevent water from rushing into the church are hampering access to the property.

There is also a slight odor of smoke in the church, which may need to be addressed.

“There are a lot of baby steps that need to happen, and, in this case, it’s really like five babies walking at once,” Sankey added. 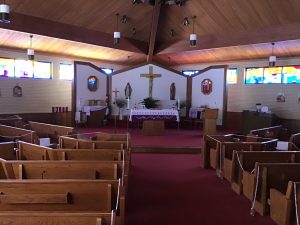 To passersby, the church building appears visibly unscathed, while the area around it looks like a bomb exploded.

The remains of the rectory and social hall are a pile of rubble. Once debris is removed, a check on the structural integrity of the underground rooms of the social hall will need to happen.

The exact cause of the fire remains under investigation. Sankey said it is believed to have started in the ceiling of the social hall kitchen.

Mary Betts was one of the volunteers cleaning the church that morning.

“I heard the fire whistle, but I didn’t think anything of it,” she said.

When she realized what was happening just a stone’s throw away, she was devastated.

“A lot of memories are gone, but I’m very thankful that the church is safe,” stressed the life-long parishioner. “It’s a true loss. I miss going to Mass every day. It’s in God’s hands, and I’m very thankful no one was hurt.”

Parish Secretary Jeannie Corden is working from home since her rectory office was destroyed.

Firefighters managed to save sacramental records and other important files, so Corden is focused on organizing those items.

She has worked at the parish for 23 years, and she has been a member for about 30 years.

She is grateful for the outpouring of support.

“Saying ‘thank you’ is not enough,” she commented. “We’re praying for everyone who helped us and is standing beside us.”

The pastor, Reverend Karl Kolodziejski, OFM Conv., is among those receiving a great many prayers and assistance after losing his home and most of his belongings.

He is residing at the rectory at nearby Saint Anne Parish in Davidsville, where he is also celebrating weekend Masses. 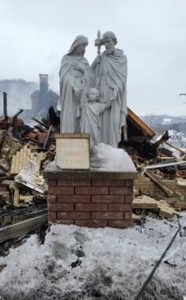 Holy Family parishioners are welcome to worship there or at Our Lady Queen of Angels Parish in Central City or All Saint Parish in Boswell until Masses at Holy Family return.

Just as Bohensky found a hopeful sign in the church bells that fateful day, Father Kolodziejski is reassured by the statue of the Holy Family that remains standing amid the rubble on the parish grounds.

“It’s a sign that things will improve,” he said. “We will return, and God will make us stronger and fill us with even more faith.”

[Photos: (Top and First Inset) Scenes from the fire at the Holy Family Parish complex on February 19. (Second Inset) An interior shot of the church after the fire reveals very little damage to the worship space. (Third Inset) The statue of the Holy Family stands amid the rubble on the parish complex.] 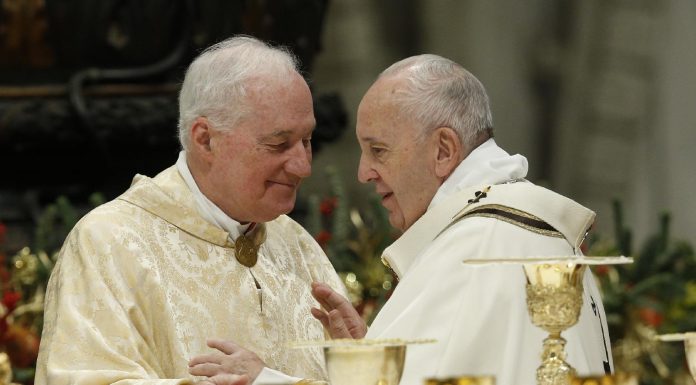