VATICAN CITY (CNS) — Told that some people think Pope Francis isn’t exactly a fan of the rosary, Jesuit Father Federic Fornos practically shouted, “What?”
“Pope Francis says the rosary is the prayer of his heart. He prays it every day,” said the international director of the Pope’s Worldwide Prayer Network, formerly known as the Apostleship of Prayer.
Father Fornos was at the Vatican press office Oct. 15 to launch the latest effort to respond to what he said was Pope Francis’ explicit request that the network help young people learn to pray and love the rosary.
The Click to Pray eRosary is both a free app for Apple and Android and an actual high-tech rosary bracelet that connects to a smartphone using Bluetooth. Making the sign of the cross with the rosary automatically opens the app on the phone, while clicking one of the prayer beads allows the person praying to advance through the prayer texts, music and images on the screen.
Father Joao Chagas, head of the youth office at the Dicastery for Laity, the Family and Life, said the app — described on clicktoprayerosary.org — is “a concrete sign of the pope’s desire to enter the lives of young people and help them pray.”
Pope Francis’ big push to get young people to pray the rosary came in the run-up to and the celebration of World Youth Day in Panama in January, Father Fornos said. Hundreds of thousands of rosaries were distributed to the young people taking part.
But the pope has not let up. Speaking to Polish pilgrims at his weekly general audience Oct. 9, Pope Francis reminded them that when Mary appeared to two young women in Gietrzwald, Poland, in 1877, she told them, “Pray the rosary every day” and, the pope said, “she assured them that the graces imparted by this prayer would be salvific and would lead people to happiness in heaven.”
“Remember these words, especially now, in the month of October dedicated to the rosary,” the pope continued. “Through the intercession of Mary, mediator of graces, we ask for peace for the world, wisdom for those who govern and for faith and unity for families.”
Marking the month of the rosary in 2017, Pope Francis tweeted: “The rosary is a synthesis of the mysteries of Christ: we contemplate them with Mary, who allows us to see with her eyes of faith and love.”
But his admonitions to pray the rosary were particularly fervent in October 2018 when the Catholic Church was reeling from accusations about clerical sexual abuse and, particularly, its cover-up.
Pope Francis asked Catholics last year to pray the rosary each day in October, asking Mary to protect the church and make it more aware of its “sins, errors and the abuses committed in the present and the past, and committed to fighting without hesitation so that evil would not prevail.”
Turning to Mary in times of trouble should be as natural as turning to one’s earthly mother when things look grim, he has said.
Celebrating the feast of Mary’s assumption into heaven Aug. 15, Pope Francis told people that the feast is a reminder that, in heaven, “there is a mother who waits for us, and she is our mother. She loves us, she smiles at us and she rescues us with great care.”
“Like every mother, she wants the best for her children and tells us, ‘You are precious in the eyes of God. You were not made for the little gratifications of this world, but for the great joys of heaven,'” he said.
“Let’s allow the Mother of God to take us by the hand,” the pope said. “Every time that we pick up the rosary and pray, we take a step forward toward the great goal of life,” which is to be with God for eternity.
The pope also has let the rosary speak for itself, such as when he went to Rome’s Shrine of Our Lady of Divine Love May 1, 2018. Greeting the crowds gathered outside the shrine’s original little church, the pope said little more than: “Let’s pray together. I’ll see you later, but let’s pray, OK?”
Then he went inside, recited the rosary with a few dozen people and came back outside to recite one more Hail Mary with the crowd and give them his blessing.
In Pope Francis’ descriptions of her, Mary is the ideal disciple: full of faith, willing to take risks and ready to set out at a moment’s notice.
The Gospel description of her visitation to her cousin Elizabeth says, “She set off in haste.”
At the end of a Marian procession and recitation of the rosary in the Vatican Gardens in 2014, Pope Francis said Mary, “the virgin of haste,” is “always ready to come to our aid when we pray to her, when we ask her help, her protection.” 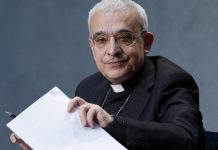 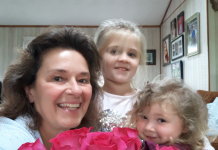