TIMONIUM, Md. (CNS) — Margaret Whitty didn’t hesitate when given the opportunity to be among the first residents of the Stella Maris Nursing Home near Baltimore to receive the coronavirus vaccine.

“They have done their homework,” 93-year-old Whitty said of the researchers. She received her first dose of the vaccine Dec. 23.

Whitty, the mother of eight children, all of whom still live in the Baltimore area, arrived at the Sisters of Mercy-sponsored Stella Maris in March, just before the start of the pandemic. Her visits with family have been limited, sometimes outside in the courtyard, sometimes behind glass.

She has been unable to attend Mass in person, instead watching on television. She celebrated her 93rd birthday over Zoom from Maryland’s largest long-term care facility.

Representatives from Walgreens pharmacy arrived at the nursing home to distribute more than 400 doses of the Pfizer vaccine, which must be kept at extremely cold temperatures to remain effective.

Pfizer’s vaccine is one of two that has received emergency use authorization from the Food and Drug Administration. The second, from Moderna, was approved Dec. 18. A third vaccine developed by British firm AstraZeneca and researchers at Oxford University is expected to be available early in 2021.

Officials at St. Anthony Hospital invited Cardinal Cupich, 71, to be vaccinated as part of a campaign developed in response to reports that some people in the communities the hospital serves were hesitant to receive the vaccine.

He was one of several Chicago-area clergymen to receive the vaccine at the hospital serving neighborhoods disproportionately affected by COVID-19.

“I am grateful to St. Anthony Hospital for their efforts to build confidence in this vaccination and to Pope Francis for his clear moral guidance on the COVID-19 vaccines,” Cardinal Cupich said in a statement released by the Archdiocese of Chicago.

“The pandemic has devastated families and communities around the world, particularly the poor and marginalized. The vaccines offer a ray of hope that the world will unite in our common humanity to bring about health and healing. Faith leaders must now step forward and encourage everyone to get vaccinated,” he added.

Cardinal O’Malley, 76, received the first of his two doses of the Moderna vaccine Dec. 24 at St. Elizabeth’s Medical Center in Brighton, Massachusetts.

He said he took the vaccine to show that it is safe and to encourage others to be vaccinated when possible.

“I am grateful to have been in line for the vaccine and encourage all people to be vaccinated as the opportunity is presented, as an important action of care and concern for our loved ones, our communities and our nation. With the help of God and the excellent medical care provided at St. Elizabeth’s and many other hospitals, we will make our way through and beyond the pandemic,” he said in a statement.

Nearly three dozen students began vaccinating eligible candidates Dec. 22 and were helping manage a clinic at the hospital. The students and faculty also were offered the opportunity to receive the vaccine.

“As men and women for others, our Fairfield nursing faculty and students are uniquely poised and eager to participate in the COVID-19 vaccination clinic,” Dr. Meredith Kazer, Egan school dean at the Jesuit-run university, said in a statement. “During these difficult times we are grateful for the opportunity to do our part toward bringing this pandemic toward its conclusion.”

In preparation for administering the vaccine, the students were trained under protocols development by the Connecticut Department of Public Health.

A student, senior Sarah Uwazany, said she was proud to be chosen to join the vaccination effort.

“Upon hearing about this opportunity for senior nursing students, I knew I wanted to take part in something that has such a major impact on the future of both health care workers and the overall population,” Uwazany said in a statement released by the university.

Elsewhere, parishes in the Diocese of San Bernardino, California, were preparing to serve as vaccine distribution sites. Public health authority agencies have been welcomed at parishes to administer coronavirus tests as reports of illness have spiked as well as seasonal flu shots.

Father Francisco Valdovinos-Ruiz, pastor of the Sanctuary of Our Lady of Guadalupe in Mecca, and Maria Teresa Pacheco, a member of Missionary Guadalupanas of the Holy Spirit, took to the airwaves earlier in December offering a radio message in Spanish encouraging residents to take health and safety precautions, get tested and receive the vaccine when it arrives, reported Inland Catholic Byte, the diocese’s online newspaper.

The diocese and the California Catholic Conference, which represents the state’s Catholic bishops on public policy issues, have mounted campaigns to encourage Catholics to receive the vaccines. Their message explains that the vaccines do not utilize cell lines that originate from fetal tissue of an aborted baby for the design, development or production and thus are morally acceptable.

“While both companies did use a tainted cell line in one of the confirmatory tests for their vaccine, this connection to abortion should be viewed by Catholics as ‘remote’ and not cause to refuse the vaccine on moral grounds,” a statement from the diocese said.

Back at the Maryland nursing home, Regina Figueroa, chief administrative officer, told the Catholic Review, the news outlet of the Archdiocese of Baltimore, the early vaccine distribution is “really just the first step in getting through this horrible trauma that we have all been a part of.”

“It’s not going to fix everything immediately, but it’s definitely going to be part of the solution,” she said.

Under the government’s plan, national pharmacies Walgreens and CVS will spearhead the distribution of the vaccines to long-term care facilities. The companies will ensure the vaccines are temperature controlled as they prepare to administer the vaccine to residents and staff. Those vaccinated early on will receive a second dose in 21 days.

The staff and residents of long-term care facilities are the second group to receive the vaccines after front-line medical workers. As of Dec. 20, residents of such facilities have accounted for about 39% of deaths, 113,891 in total, according to the Kaiser Family Foundation.

Contributing to this report was Tim Swift, social media editor of the Catholic Review, the news outlet of the Archdiocese of Baltimore. 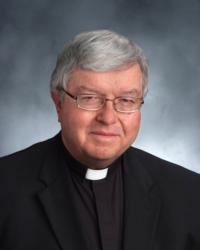 Reports: Official Living in Same Residence as Pope is Positive for COVID-19

COMMENTARY: Mary of Guadalupe, Symbol of Hope and Renewal