VATICAN CITY (CNS) — The mission of the church and of all Christians is to proclaim and live the Gospel in daily life, Pope Francis said.

“Each one of us, by virtue of baptism, is called to be an active presence in society, inspiring it with the Gospel and with the lifeblood of the Holy Spirit,” he said.

Before reciting the Angelus prayer Oct. 18, the pope reflected on the day’s Gospel reading (Mt 22:15-21) in which the Pharisees sought to trap Jesus with the question about whether it was lawful to pay a tax to Caesar, the leader of the Roman Empire, which had control over the Mediterranean region.

Aware of the Pharisees’ evil intentions, Jesus asked them to observe whose image was on the coin and because it was Caesar’s, he said, “Then repay to Caesar what belongs to Caesar and to God what belongs to God.”

Pope Francis said this shows how Jesus not only avoided their trap but also describes “the criteria for the distinction between the political sphere and the religious sphere, and gives clear guidelines for the mission of all believers for all times, also for us today.”

“Paying taxes is a duty for all citizens, just as is complying with the just laws of a nation,” he said.

But at the same time, “it is necessary to affirm God’s primacy in human life and in history, respecting God’s right over that which belongs to him,” the pope said.

Christians are asked to be engaged in society “with humility and, at the same time, with courage, making their contribution to building the civilization of love, where justice and fraternity reign.”

The pope prayed Mary would help “all of us to flee from all hypocrisy and to be honest and constructive citizens. And may she sustain us, disciples of Christ, in the mission to bear witness that God is the center and the meaning of life.”

After the formal prayer, Pope Francis reminded everyone that the church was celebrating World Mission Sunday, a day on which Catholics are asked to show their support of missionaries around the world through prayer, reflection and material contributions.

He also expressed his joy and gratitude for the liberation of Father Pierluigi Maccalli, a member of the Society of African Missions, who had been kidnapped in Niger in 2018. He and three other hostages were released in Mali after being held captive for more than two years.

Pope Francis said, “Let us keep praying for missionaries and catechists and also for those who are persecuted or abducted in different parts of the world.” 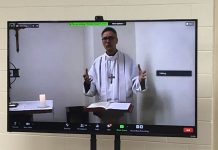 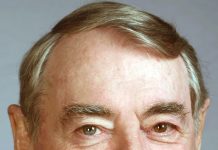 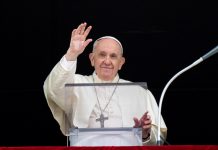 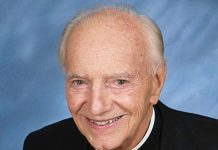