Q. Are first cousins allowed to be married in the church? I have in mind a couple I know whose fathers are brothers. They hadn’t known each other as children but met later at a family reunion and then fell in love. They were married in a civil court, which is allowed in some states. The parents of both have given their consent, but there are some other relatives who cannot accept the situation. I want to know whether this couple can now get married in the Catholic Church. (Arlington, Virginia)

A. The church’s Code of Canon Law (Canon 1091) prohibits marriage between two first cousins. However, this is considered to be an impediment by ecclesiastical rather than divine law, and the diocesan bishop can grant a dispensation for them to marry validly in the church. As you mention, the civil law on this differs from state to state. Today, about half of our nation’s 50 states prohibit marriage between first cousins, while the other states either permit it or allow it under certain conditions. (In several states, it is permitted only if both parties are 65 or older or if one is infertile. The historical reason for regulating this, of course, has been the fear that genetic problems can arise in children whose parents are too closely related by blood.) So, to your question, the couple you write about should meet with their parish priest, who will assist them in seeking the bishop’s permission for them to be married in the church.

Q. Our parish is blessed to have a small but extremely popular perpetual adoration chapel. Because so many who came for adoration were bringing lavish flower arrangements, our sacristan — with the pastor’s permission — forbade all plants, and there are now two signs declaring this ban on either side of the monstrance. I find these signs to be distracting and rather disrespectful of the Blessed Sacrament, especially since the prohibition of flowers has already been posted at the chapel’s entrance. Am I overreacting, or are there valid reasons for requesting the removal of the signs from the monstrance altar? (City of origin withheld)

A. No, I don’t think you are overreacting. You should speak with your pastor and simply explain your feeling that the presence of the signs right next to the monstrance takes the focus away from the Blessed Sacrament. I am not aware of any specific church regulations with regard to this, but I would think you could back up your argument by quoting from the General Instruction of the Roman Missal, the church’s official liturgical guidebook. There it states, “Floral decorations should always show moderation and be arranged around the altar table rather than on the altar table” (No. 305). It seems to me that if flowers are not to be permitted right next to the Eucharist, then — even more — those distracting signs should be moved away. The U. S. Conference of Catholic Bishops does have on its website a document called “Perpetual Exposition of the Blessed Sacrament” that, although it does not speak directly to your question, addresses the reverent attention with which such adoration should take place. Quoting the Vatican’s Congregation for Divine Worship and the Sacraments, it notes that “every effort should be made to ensure that there be at least two people present. There must absolutely never be periods when the Blessed Sacrament is exposed and there is no one present for adoration.”
– – –
Questions may be sent to Father Kenneth Doyle at askfatherdoyle@gmail.com and 30 Columbia Circle Dr., Albany, New York 12203. 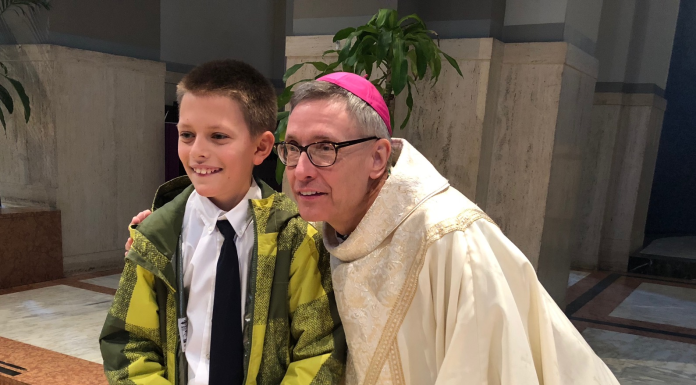