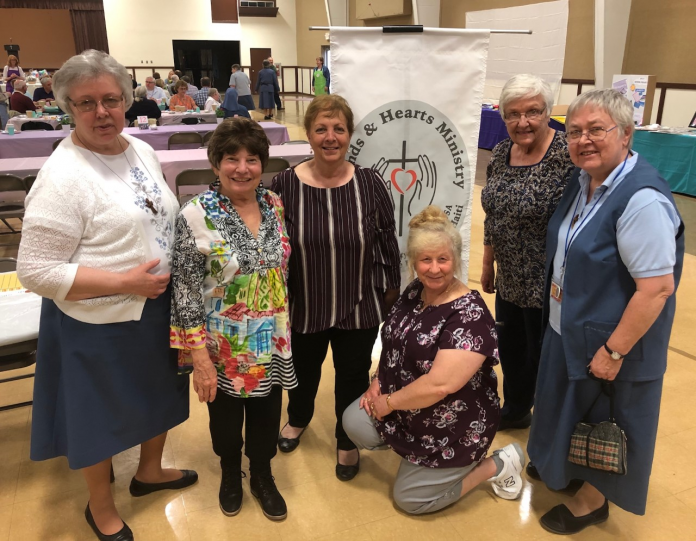 “If you think you are too small to have an impact, try going to bed with a mosquito in the room.”

In the heart and mind of Sister Marilyn Welch, CCW, that old quote sums up her commitment to helping some of the poorest people on earth.

For decades, Sister Marilyn and her fellow Carmelite Community of the Word sisters have been tirelessly devoted to meeting the basic needs of their brothers and sisters in Haiti.

The CCW sisters call it their Hands and Hearts Haiti Ministry, an extension of their cherished relationship with the Little Sisters of the Incarnation in the island nation.

The ministry, the relationship, and the support of so many others from throughout the diocese were highlighted recently at the annual CCW Haiti Fet. The word fet is Haitian for celebration or party.

Held every year during the Easter season, the event showcases various aspects of the ministry, educates supporters about the needs in Haiti, and even features a Haitian-inspired meal.

The Little Sisters of the Incarnation, she explained, care for about a thousand children in a variety of ways. The CCW tries to provide essentials like socks and underwear.

“All year we collect new items,” Sister Marilyn noted. “We have a sewing group that meets every week in the summer and sews brand new skirts and shorts and fitted diapers for the babies and little stuffed toys. It’s a project that is really born of our hands and our hearts.”

Buying all of these necessary items would be too costly, so sewing them enables the community to have a greater impact.

And there are many other ways to support the effort.

Throughout the summer, for example, volunteers sort and label all of the clothing and package everything for a sea container shipment in the fall.

A delegation also travels to Haiti in January.

Bernadette Sikorsky made the journey twice, and both visits were eye-opening.

“It really showed me what they needed over there, and I felt that I needed to help them, and I really learned to appreciate what we have here in the United States,” she said.

A parishioner at the Basilica of Saint Michael the Archangel in Loretto, Sikorsky helps pack the sea container, and she does a lot of sewing, particularly quilts for the children’s beds.

“Each year we make a different kind of doll,” she added. “This year we’re going to make some stuffed animals, also.”

A few years ago, Stephen Gerko spent about two weeks in Haiti.

“Our mission was to build a dormitory and meeting room,” he recalled.

He plans to return in January, and his son-in-law may join him.

“If I were to describe the Haitian people in one word, it would be ‘joyous,’” Gerko remarked. “It just rubs off on you.”

That joy has obviously touched the life of Sister Marilyn, too.

“The Little Sisters have become like sisters to me,” she stated. “We are two separate communities, but over the years I have come to know each of the sisters personally, and as we meet with them every year, we learn more and more about their lives.”

Also revealed is a valuable lesson in a culture in which we Americans simply pick up necessities at our favorite store.

“Haitians don’t have that access, so what it tells me is that I need to be grateful for the gifts God has given me, but I also need to share whatever I can with the poor, and the Haitians are so obviously poor that it doesn’t take much to figure out what they need,” mentioned Sister Marilyn.

So as each of us figure out that need, each of us – just like that one mosquito – can make quite an impact. 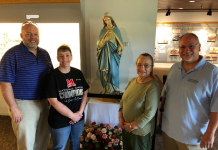 Statue Remains an Important Symbol for Parish and Community