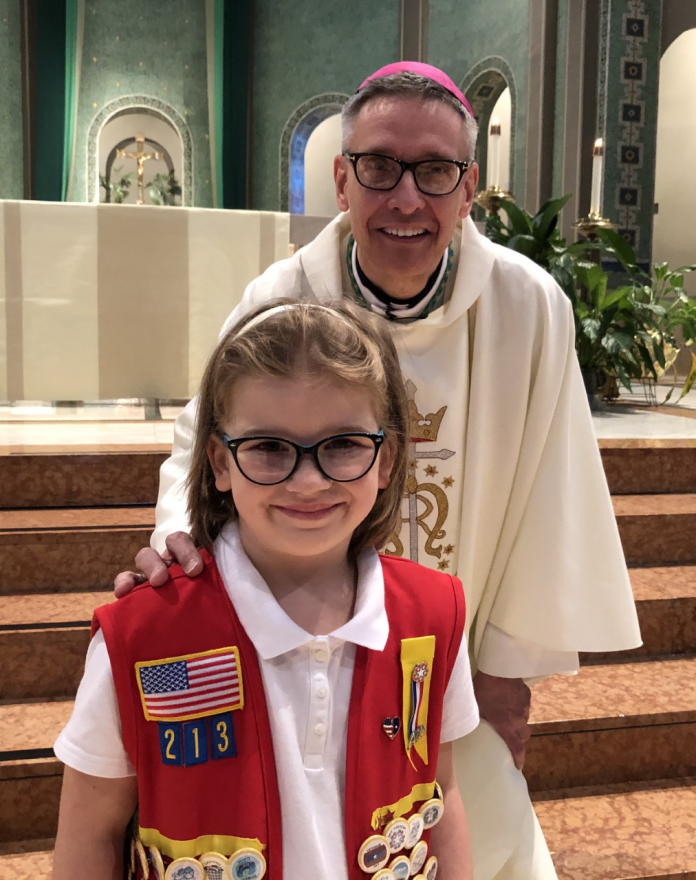 Every grandfather enjoys moments of pride as his grandchildren follow in his footsteps and embrace cherished family traditions.

For John Walsh, one such moment came during the recent Catholic Scouting Emblem Award Mass. Bishop Mark celebrated the liturgy on October 12 at the Cathedral of the Blessed Sacrament in Altoona. 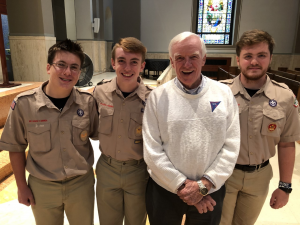 The awards presentation that followed was, indeed, a joy for Walsh as his grandsons Colin, Joshua, and Travis Bechtel received the Ad Altare Dei Award for their commitment to Catholic Scouting.

When Walsh was a scout, he earned the same honor. Now, decades later, he counsels a troop in Erie.

“We need to emphasize the Catholic portion of Scouting,” Walsh commented. “It is very important for the young men to learn about their faith and practice their faith.”

The Ad Altare Dei Award is the first award a boy scout can earn, noted Walsh.

“It’s really the toughest award because it has a lot of requirements,” he explained. “It’s about the foundation of our faith including the seven sacraments.”

The requirements include a retreat and month-long service project.

Members of Troop 383 and Our Lady of Victory Parish in State College, the Bechtel brothers engaged in community and parish service.

They were among 11 Ad Altare Dei honorees. Others were recognized with the Pope Pius XII Award, the Pope Paul VI Unit Award, and the Saint George, Angel on my Shoulder, Marian Medal, Light of Christ, and Parvuli Dei Awards.

“This is a great time for you to be recognized from the Boy Scouts of America, from your troop leaders, from your parents, from everyone to recognize that you are listening to and doing what Jesus tells us to do,” said Bishop Mark in his homily. “Keep up the good work.”

The good work of Scouting really is a proud tradition in the Walsh/Bechtel family.

Colin, 17, Joshua, 15, and Travis, 13, acknowledged their grandfather for encouraging them and supporting them over the years and the inspiration of other relatives.

“Scouting teaches you how to be a good citizen of the country and a good member of your Church,” he stressed.

[Top photo: Bishop Mark poses Autumn Smith, a member of Saint Demetrius Parish in Gallitzin and recipient of the Angel on my Shoulder award.] 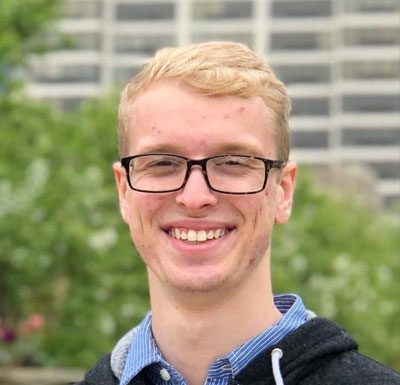