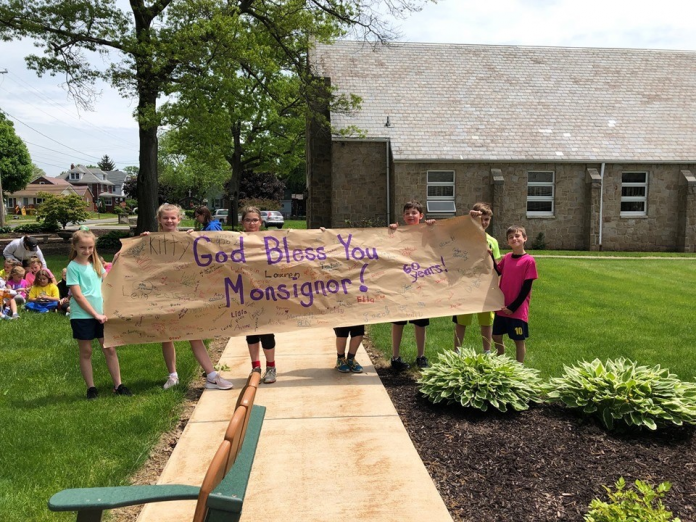 Saint Peter School in Somerset recently celebrated their annual Sports Day but took some time out to honor their Pastor Emeritus and long-time servant of Saint Peter Parish, Monsignor Tomaselli on the occasion of his 60th Anniversary of his ordination to the priesthood.

Monsignor Samuel Tomaselli, whose anniversary was acknowledged in the a recent Catholic Register article, is still very present to the school community and he has served the parents and grandparents of many of the current students while a shepherd at Saint Peter Parish.

The school often likes to surprise Monsignor with gifts and hand-made banners and other celebration fare, but when this anniversary came around, all agreed that their prayers were what he wants the most.

When he helps with the school confessions or says the occasional children’s Mass, he always closes with “Remember to pray for me.”  So on a breezy May afternoon after a morning of Sports Day fun and activities in their Faith Families, the students picked up a rosary and gathered in the parish courtyard with a special banner and along with their teachers, rectory staff, parent volunteers, and Father Angelo Patti (Pastor), and circled around Monsignor and bowed their heads to pray the Luminous Mysteries with and for a shepherd whose life work has illuminated so many lives.

Father Patti led the Rosary and afterwards Monsignor gave all in attendance a special blessing.  The afternoon was a special event not to be forgotten by all – young and old. 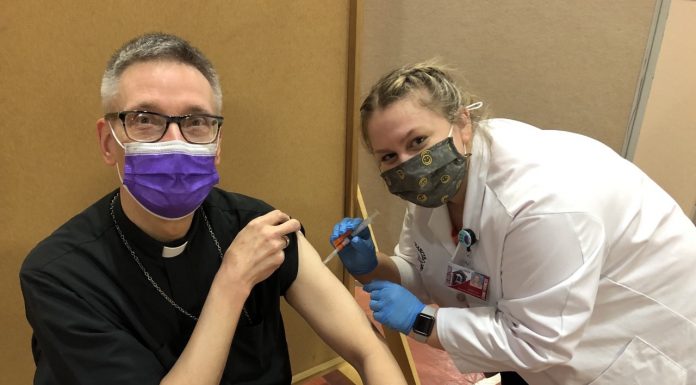