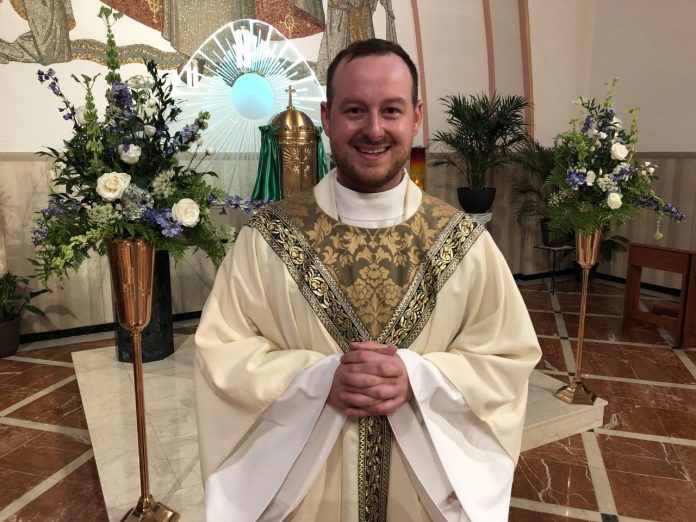 Little did Georgia Corso know that when she used to bring her teenage grandson, Michael Pleva, to 5:30 p.m. Mass every Saturday night at Sacred Heart Parish in Altoona that it would put him on a path that would change his life forever. 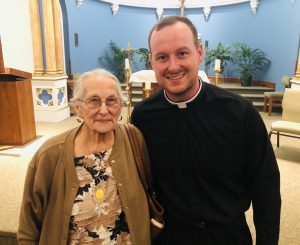 “My grandmother is one of the most faithful women I’ve ever met in my life,” insisted her grandson. “Whenever I would watch Monsignor Stanley Carson, who was the pastor, celebrate Mass, and sitting next to my grandmother who was always in prayer and always in tune to the Mass, I started to question if I could do that and if I wanted to do that. Every time that I would come to this church, I sensed that God was calling me deeper and deeper into union with Him and also into service to His people.”

Happily, Michael answered that call and was one of two men ordained a priest of the Diocese of Altoona-Johnstown on May 29 at the Cathedral of the Blessed Sacrament in Altoona.

That glorious day, Mrs. Corso proudly traded her pew at Sacred Heart for a front row seat at the Cathedral, along with Pleva’s parents, Russell and Mary Ann, and other family.

This month, she has the added pleasure of seeing her grandson in action at her beloved Sacred Heart, where Father Pleva is assisting until he begins his first official assignment in July.

“I love being a priest in these early days of my priesthood,” exclaimed Father Pleva, after celebrating morning Mass on a recent June day.

Already, he is learning valuable lessons.

“I learned that this is not about me,” he stressed. “I learned that I have to be grounded in prayer before I can minister to God’s people, and through that prayer I realize that I can do many things to bring Christ to others. One of my biggest joys of my priesthood so far is seeing Christ alive in the people that I’ve been ministering to.”

A native of Holy Rosary Parish in Altoona, Father Pleva will soon begin his appointment as Parochial Vicar at Our Lady of Victory Parish in State College, Chaplain of Saint Joseph’s Catholic Academy in Boalsburg, and Chaplain at Mount Nittany Medical Center in State College.

Until then, he will continue helping out at Sacred Heart and also neighboring Saint Mary Parish – both under the pastorate of the Very Reverend Lubomir Strecock, VF, who has become a friend and mentor to Father Pleva.

As a transitional deacon, Father Pleva served at Saint Benedict Parish in Johnstown, and he has had other parish assignments throughout the diocese as a seminarian. But one thing he couldn’t do until now is bring Jesus to the faithful through the consecration.

“It is the most humbling experience that I have ever had in my entire life,” he confessed. “Saying those words and offering the Sacrifice to God on behalf of the people who are placing their intentions on the altar is unbelievably humbling. Especially here at Sacred Heart and Saint Mary, I look out and see the people that I once prayed with, and now I pray for.”

One of those people Father Pleva sees in the pews is Sacred Heart parishioner Barbara Gerhart, who grew up in the neighborhood of the Pleva family. She and others with a connection to the new priest are beaming with pride.

“Seeing him in my church today celebrating Mass is wonderful,” gushed Gerhart. “To watch him go through the whole journey in his life is just a wonderful experience. With everything going on, Father Pleva said ‘I will,’ and I think he will carry out his duties and his dreams to reach everybody. His family should be so proud of him.”

They are, indeed, proud of him, and the feeling is mutual.

“My parents have constantly shown me love, kindness, and compassion,” Father Pleva admitted.

Now, the new priest is taking that example with him as he becomes a “spiritual father” to his flock.

“I have more children than I can count, even though they’re not biological children,” he noted. “What I’m looking forward to the most is showing that Christ is dwelling within them, to show that being alive in the faith means living the Gospel message. We do that together – I as a spiritual father walking with them on this journey of faith. That is what I’m looking forward to the most.” 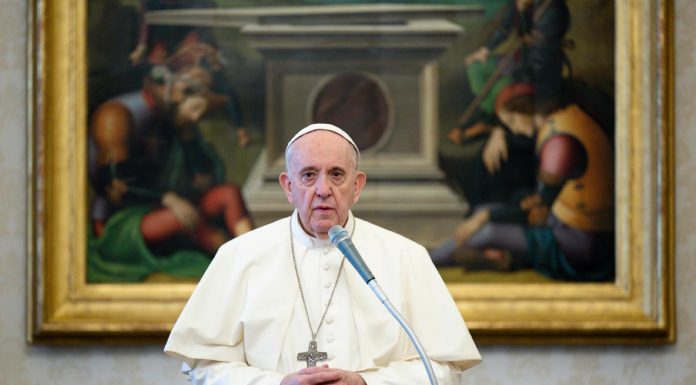