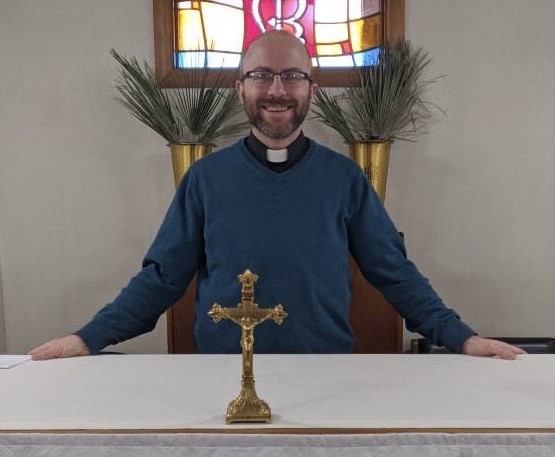 As someone with a grateful heart, Father Matt Baum always looks forward to Thanksgiving. This year, however, the holiday is going to be especially significant for him.

Less than a month ago, Father Baum, Administrator of Prince of Peace Parish in Northern Cambria, tested positive for COVID-19.

Not surprisingly, it was a scary diagnosis.

He was obviously concerned about his own health and recovery, but he had another big worry.

“I was relatively young and healthy, and I was hopeful that I would get through it fine,” expressed the 38 year old clergy member. “But my concern was for other people at the parish. As a priest, you’re around people unavoidably.”

Immediately, Father Baum thought of staff, parishioners, and community residents with whom he had been in contact in the days leading up to his symptoms. Since the virus is highly contagious, it was gut-wrenching for him to think that he could have possibly infected those around him.

Happily, Father Baum said it appears he did not spread the virus to anyone.

“That’s a real blessing,” he added.

His first indication that something was wrong came on a late October Friday. His temperature soared, so he immediately sought a COVID test.

The fever only lasted a short time, Father Baum said, but other symptoms included a sore throat, a stuffy nose, and eventually a cough.

By about the tenth day, Father started to feel he was returning to normal.

During his time in quarantine, Masses at the parish were cancelled. The deacon celebrated Communion services at Prince of Peace’s chapel site, a location at which Father Baum had not been for several days before exhibiting symptoms.

Besides those Eucharistic opportunities, other aspects of parish life came to a halt, which weighed heavily on Father Baum.

“Everything throughout this pandemic has been a concern,” he admitted. “We want to keep the people involved, we want to continue parish life as best we’re able, and this was another block in the road. I’m thankful that we’re through it. Thankfully, our parishioners were wonderful and everything cruised along alright.”

Father Baum has also been comforted by the number of people who reached out to him, especially those who had tested positive for COVID-19, but were reluctant to discuss their situation with others.

Knowing that a priest was also battling the virus made them feel less alone, he theorized.

With quarantine behind him and his health restored, Father Baum is looking forward to Thanksgiving, Advent, and Christmas with a whole new perspective and a desire to fully immerse himself in ministry again.

Editor’s Note: Father Baum shares more of his story in an exclusive conversation with Tony DeGol and reveals another reason why he is especially grateful this Thanksgiving. Watch the conversation on November 29 edition of Proclaim! at 10:30 a.m. on WATM ABC 23.

[Photo: Father Matt Baum stands at an altar in the spring of 2020.]