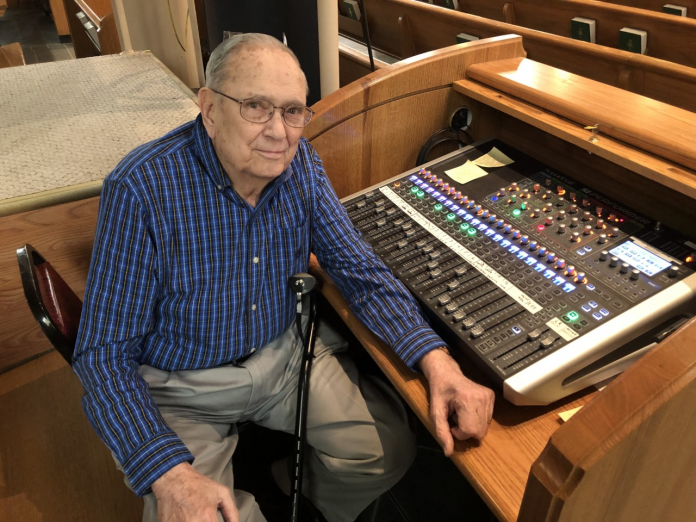 Not many little boys are lucky enough to find a mentor who will still influence them later in life.

David Micik found that inspiring person when he began learning the broadcasting business under the watchful eye of Dino Tessari. Now, Micik is among the many people thanking and saluting Tessari as he enters a new chapter of his life.

After more than three decades of faithful volunteer service to the diocese’s Proclaim! television ministry, Tessari, who was the Executive Producer of the weekly live Mass broadcast, is retiring at the age of 90.

“I have to give it up because I have to climb steps to get up to the control room, and it’s getting very difficult,” he lamented.

Micik began volunteering at the age of nine. Now 24, he still contributes greatly to the ministry.

“Dino has taught me so much over the years, and still – 15 years later – he continues to impart priceless wisdom about television production and life,” Micik noted. “You can’t help but truly admire his dedication and love for the broadcast industry, his faith, and desire to give back and help others.”

It is hard for Tessari to not feel proud when he thinks of how he impacted Micik and the many other young volunteers who have shared their time and talent each week with the broadcast. It is also a time for Tessari to fondly recall how much the TV Mass ministry has grown and how many people value it.

The late Deacon John Sroka was among the visionaries who helped make the televised Mass a reality in the late 1980s, and Tessari became part of that team. At the time, he was still engaged in his broadcasting career at WJAC TV in Johnstown.

In the early days, the Mass at Saint John Gualbert Cathedral in Johnstown was only broadcast on local cable access, but still provided a tremendous gift to the Catholic community.

“I think the people who were really happy were the people in nursing homes, hospitals, and confined to their homes – people who could not get to Mass,” Tessari recalled. “It was really wonderful for them.”

The growth included additional cameras in the Cathedral and more sophisticated equipment. Eventually, the broadcast moved from cable access to local network affiliate WWCP TV FOX 8 and then to WATM ABC 23 where it currently airs every Sunday at 11:00 a.m. The Mass re-airs every Sunday night at 9:00 p.m. on the Atlantic Broadband cable access channel. A few years ago, satellite expansion enabled the Mass to be broadcast anywhere in the country – including the Faith and Family Channel of Cornerstone TV.

Tessari, who continued his commitment to the diocese’s TV ministry after he retired from WJAC, has been right at Father Chuck’s side over the years.

“Dino is a repository of the broadcast industry both commercially and even more importantly what we’re doing here with the live Mass broadcast every Sunday,” Father Chuck stated. “It’s very gratifying to know that our viewers – many of whom are homebound – greatly appreciate what he does for us.”

When the Very Reverend James Crookston, Rector of Saint John Gualbert Cathedral, visits the faithful in care facilities or hospitals, they often mention seeing the Mass on TV.

“They’re able to do that because Dino is the one who makes sure the Mass comes through, and people have found throughout the years a form of prayer – not just a watching of television,” Father Crookston mentioned. “A million thank yous, Dino, for all you’ve done for Catholics and others in this area.”

Although Tessari is retiring from his weekly duties, he hopes to continue to inspire the ministry and great volunteers like Micik, who remains committed to the weekly Mass broadcast despite his position as Director of Entertainment for the Erie Seawolves, an affiliate of the Detroit Tigers.

“Dino is not only a mentor of mine in the broadcast industry, but I consider him to be family,” Micik stressed. “I will always cherish my time and great memories with Dino and our Proclaim! TV family.”

As for Tessari, he summed up his remarkable 30-plus years of service to Proclaim! in one very accurate statement:

“All I can say is you have to use your talents, and I think I’ve done that.”

Editor’s Note: See more of Dino Tessari’s story on Proclaim! TV this Sunday, January 19 at 10:30 a.m. on WATM ABC 23. Bishop Mark and Diocesan Director of Communications Tony DeGol join Father Crookston and Father Bridges in extending heartfelt thanks to Dino and best wishes for a healthy and happy retirement. 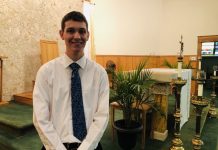 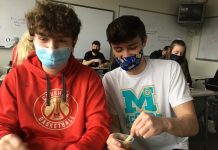 Surging McCort Enrollment Another Sign of the Success and Stability of...