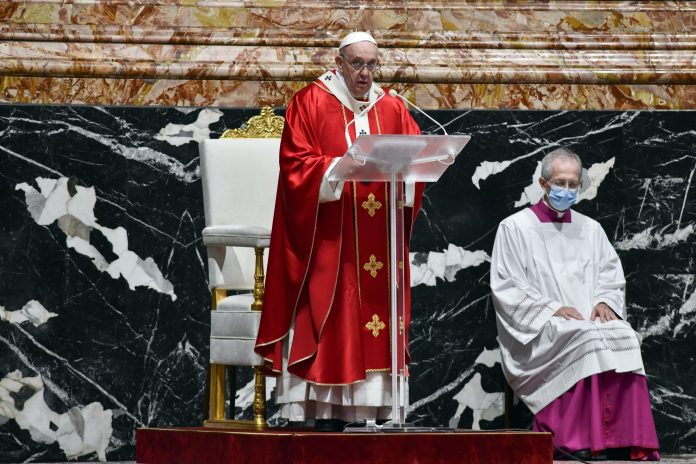 VATICAN CITY (CNS) — Praying for the dead and asking God to welcome them into his presence forever helps Christians remember what life and death are really about, Pope Francis said.

Such prayers “instill in us a true vision of life; they reveal to us the meaning of the trials we must endure to enter the kingdom of God; they open our hearts to true freedom and inspire us unceasingly to seek eternal riches,” the pope said Nov. 5 during a memorial Mass.

The annual Mass at the Altar of the Chair in St. Peter’s Basilica offered prayers for the six cardinals and 163 bishops who died over the past year, including 16 bishops from the United States and three from Canada.

Because of measures to prevent the spread of the coronavirus, the public was not permitted to attend the liturgy. Cardinal Giovanni Battista Re, dean of the College of Cardinals, and Cardinal Francis Arinze, a retired Vatican official, were the principal concelebrants.

One of the prayer intentions during the liturgy asked God to “welcome into your loving embrace the cardinals and bishops who died this year and give them the reward reserved for your faithful servants.”

In his homily, Pope Francis focused on Jesus’ promise: “I am the resurrection and the life; whoever believes in me, even if he dies, will live, and everyone who lives and believes in me will never die.”

Jesus’ promise is a challenge to believers, the pope said. “We, too, are called to believe in the resurrection, not as a kind of distant mirage but as an event already present and even now mysteriously at work in our lives.”

However, he said, like Jesus, who cried at the tomb of his friend Lazarus, “our faith in the resurrection neither ignores nor masks the very human bewilderment we feel in the face of death.”

“As we pray for the cardinals and bishops deceased in the course of this last year,” the pope said, Christians should ask the Lord “to dispel that unholy grief which we occasionally feel, thinking that death is the end of everything — a feeling far from faith, yet part of that human fear of death felt by everyone.”

Faced with “the riddle of death,” with its end of earth life and beginning of eternal life, Christians are called to conversion, he said.

“We are called daily to leave behind our instinctive image of death as the total destruction of a person,” Pope Francis said. “We are called to leave behind the visible world we take for granted, our usual, commonplace ways of thinking, and to entrust ourselves entirely to the Lord who tells us: ‘I am the resurrection and the life.’”

When Christians believe that, he said, their prayers for the deceased are “truly Christian” prayers.

Such prayers “enable us to have a truly realistic vision of the lives they lived, to understand the meaning and the value of the good they accomplished, their strength, their commitment and their generous and unselfish love,” he said. And they also help people “understand the meaning of a life that aspires not to an earthly homeland, but to a better, heavenly homeland.” 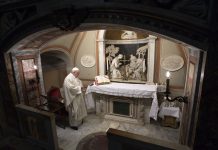 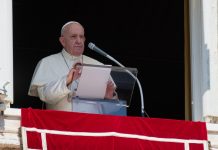 COMMENTARY: Woe to Those Who Gossip 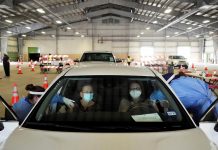 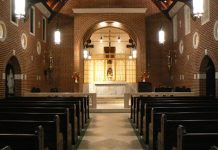 Discalced Carmelite Nuns to Pray Novena for the Memorial of Our...

True Prayer, Like True Faith, Leads to Care for Others, Pope...