GLEN ALLEN, Va. (CNS) — When St. Michael the Archangel Parish in Glen Allen received a bequest from the estate of a deceased parishioner, its pastor, Father Dan Brady, saw an opportunity for evangelization.

The parish purchased 3,400 copies of “Reading God’s Word” for members of its parish and its two sister parishes — one in Richmond and one in Appalachia.

Noting that St. Michael’s theme for the liturgical year is “Praying the Word,” Father Brady said even though parishioners can’t pray together physically due to concerns about COVID-19, they are connected in prayer and through the book, which contains the Scripture readings for daily and Sunday Masses.

“One of our tasks as a church is to spread the Word,” the priest said. “To me, I can’t think of any better way to do this than this way.”

However, there was another cost associated with getting the book to parishioners: postage for the 1,000 copies that needed to be mailed at a cost of $3.86 each.

Father Brady, 75, had a solution. A stamp collector for 65 years, and with thousands of stamps accumulated over that time, he donated them to the parish to cover the cost of the mailing.

“When I realized this ridiculous number I’ve collected, I decided to use them,” he told The Catholic Virginian, newspaper of the Diocese of Richmond. “For me, it’s perfect. They are being used to spread the Word.”

Father Brady’s love of stamps began with his grandfather. As a child, his grandfather would sit him down and show him his collection. Some stamps dated to the 1860s and 1870s. Those bore the actual signature of the postmaster. This fascinated the boy, and he has been collecting ever since.

When his grandfather died, Father Brady inherited his collection.

“I can still remember my grandmother taking me to the store and getting me a new stamp album,” Father Brady recalled. “It was a very special way to start.”

His interest in stamps ebbed and flowed during his adolescence but grew as he got older.

After finishing college, Father Brady joined the Peace Corps, serving in West Africa. There, he noticed the stamps were very different from stamps in the United States and started saving them.

He has since collected stamps from all over the world during his travels. Some have portraits, paintings, flags and monuments. All have a story to tell. He sees stamps as “miniature works of art.”

Over the years, Father Brady kept buying sheets and books of new and distinctive stamps, never just a few. If a new stamp came out, he would go and get a book of them, even if he was not yet in need. He kept the unused stamps, and eventually grew his collection to more than 30,000 stamps.

When the decision was made to mail a thousand copies of “Reading God’s Word,” Father Brady knew his stamps no longer belonged in collection books, but on the packages spreading God’s word.

“One of the things I’ve always been particular about is that stamps should be used, not just collected,” he said.

May Sue McClintock, the parish’s director of evangelization, added: “He feels certain this was the reason he started collecting all along. He is excited to share this with the parishioners of St. Michael.”

Minus the 10,000 stamps required for the mailing, Father Brady no longer has his stockpile, although he did keep one stamp of each design for his collection. He also kept his main collection of vintage, international and favorite stamps.

The reaction of the parishioners has made his donation completely worthwhile.

“It’s been absolutely fantastic,” Father Brady said. “We’re going crazy sitting in our houses staring at four walls. Everyone is just so grateful for something to do.”

He said “Praying the Word” and “Reading God’s Word” are a perfect combination — a way to bring people together.

He hopes readers will see that God invites everyone to come together as one and find peace in God’s message.

“I think the world needs us all the more right now. We live, unfortunately, in a time when everybody is angry at everybody. We have a message of love to spread. It’s in the Word, the books we pass out,” he said. “We need to be messengers of that kind of peace and reconciliation.” 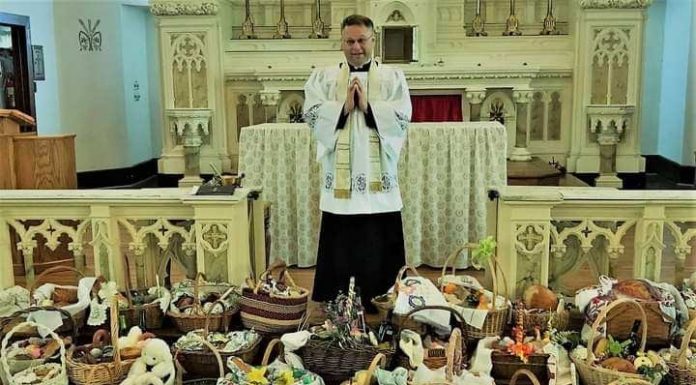