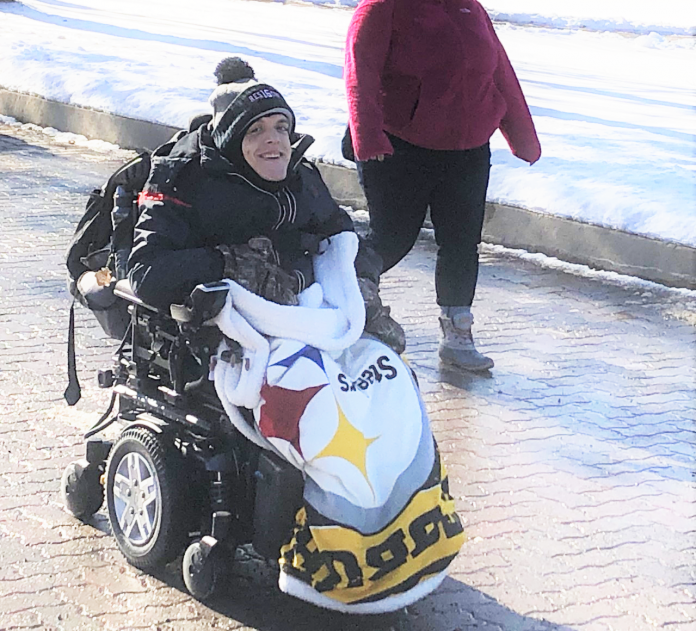 Jorden McClure happily braved the cold weather at the annual March on Mountain.

He sported a hat and heavy coat, and he also had a Pittsburgh Steelers blanket keeping him snug in his wheel chair.

Like everyone else who turned out for the march, Jorden showed great enthusiasm for the sanctity of human life. And for him, the gathering was especially personal.

While Jorden’s mother was pregnant with him, her doctor detected health concerns with the unborn child and advised against giving birth to the baby.

Now a senior at Bishop Guilfoyle Catholic High School in Altoona, Jorden was among the many Catholic school students and adults who turned out for the annual pro-life event at Saint Francis University on January 22. 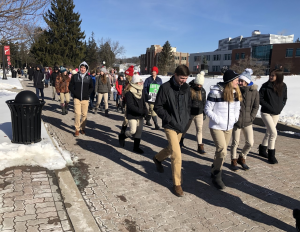 “We’re trying to raise awareness that life is worth the struggle,” said Patrick McCauley, a Saint Francis student and one of the organizers.

“It’s just a celebration of life,” added fellow student and organizer Spencer McElheny. “All life is precious and the fact that we see it being taken is something we want to see changed. For the past three years that I’ve been here on campus, the turnout just gets better and better.”

Before marching around the mall on the sunny but very chilly morning, participants gathered inside Immaculate Conception Chapel on campus to pray the Rosary.

Father James Puglis, TOR, Director of Campus Ministry, reminded the crowd that their presence was by no means a waste of time.

Father Puglis continued: “On this beautiful day, we remind people that days like today are worth existing for, and we should not cut off others’ existence. We should not cut off anything that will keep them from the goodness of being alive. This is difficult in our society, and yet it’s what we are called to do.”

That message was not lost on marcher Mia Wyland.

“I think every life should be cherished and loved,” insisted the Bishop Carroll Catholic High School senior.

Giuseppe Bernard, also a BCCHS senior, stressed that his participation in the march was not a protest.

Following the march, Mass was celebrated in the chapel followed by a period of Adoration of the Blessed Sacrament.

This was the seventh year for the March on the Mountain.

Editor’s Note: See more coverage of the March on the Mountain on Proclaim! this Sunday at 10:30 a.m. on WATM ABC 23. 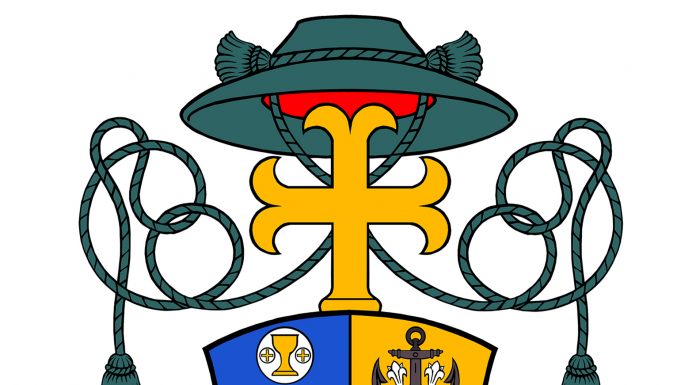