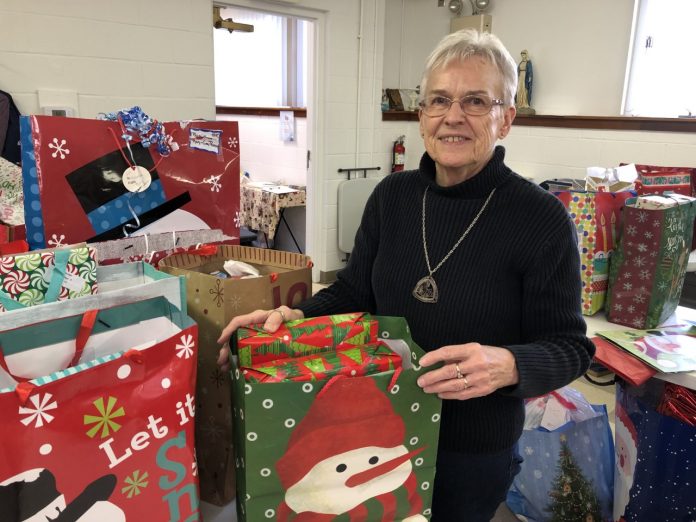 Scripture portrays Martha as someone who was worried and anxious.

This Christmas, another Martha is calm, cool, and collected even in these uncertain times.

“I’m anxious and troubled about many things, but I’m not worried about this project because I know it will work,” assured Sister Martha Burbulla, CCW. “No matter what we have to do, the children will get the gifts.”

Sister Martha is referring to the annual Christmas program at the Diocese of Altoona-Johnstown’s Fulton County Mission, which is underway again this year.

Calling it a “program” really does not do it justice.

In reality, it is an outpouring of love and generosity that reaches all corners of Fulton County — an area of the diocese that is by no means considered wealthy.

“The program is one we’ve had for many years here, and it’s open to any child in Fulton County newborn to age 14,” Sister Martha explained.

Parishioners at Saint Stephen Parish in McConnellsburg – the only Catholic Church in Fulton County – donate cash or gifts along with friends and neighbors from other faith communities, businesses, schools, and organizations not only in that region, but throughout the diocese.

The goal is simple:  making Christmas brighter for children. And in some cases, giving youngsters a Christmas they would not otherwise have.

“This year we have had so many toys and games and things of that sort donated in addition to financial donations,” Sister Martha noted. “SHYCON (the diocese’s annual Senior High Youth Conference for students in grades 9-12) was virtual this year, but we still received donations for the Mission from SHYCON and from other people from within the county. It has been a real blessing.”

That generosity is not surprising. In the program’s 30-plus year history, it seems the spirit of giving grows each year. And thanks to the pandemic, the helping hand is needed now, more than ever.

“It has been very hard on a lot of people, and I have been listening to people talk about losing their job and looking for things to do to make money,” Sister Martha stated. “For some, things have been really difficult.”

Sister Martha has a team of elves who help her sort and wrap the mounds of gifts in the days leading up to the distribution. The group of close-knit volunteers has almost become like a family.

Even more rewarding than the time they spend together is the heartfelt gratitude they receive from the people in the community they help.

“They really appreciate it, and sometimes the people that are signing their kids up for the program are people who had received gifts themselves in the past, so they know it’s a nice project,” added Sister. “The children have a good time, but from my perspective, the people who are helping to give these things have as much fun as the kids, perhaps more.”

So unlike her biblical counterpart, this Martha, indeed, has no worries or anxiety when it comes to caring for our friends and neighbors this Christmas.

And the spirit of this amazing season propels her to continue the great work of the Fulton County Catholic Mission, and ultimately spread the love of Christ.

“I think we are all part of this wonderful gift that God gave us – Jesus,” Sister Martha expressed. “I’m so grateful for the kindness and generosity of so many people who have reached out and given to the Mission. There are needs in so many places, and this is a highlight of what is needed everywhere. God is alive and well in Fulton County and every place.”

Editor’s Note: The Fulton County Catholic Mission Christmas program will be highlighted on the upcoming Christmas TV show “Joy to the World: Christmas in the Diocese of Altoona-Johnstown” December 20 at 1:00 p.m. on WATM ABC 23 and December 25 at 7:00 a.m. on WWCP FOX 8.

[Photo: A volunteer sorts and wraps gifts for the Fulton County Catholic Mission Christmas program in 2018.] 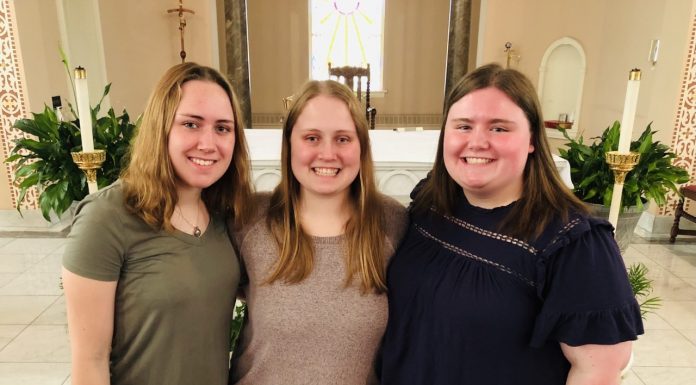