Editor’s Note: The Sisters of Charity of Seton Hill are celebrating their 150th Anniversary of the founding of their Community in Altoona.  The original six sisters came from the Sisters of Charity in Cincinnati and arrived by train on August 20, 1870.  They were invited by Rev. John Tuigg at St. John’s Parish in Altoona to work in the school that had started several years earlier.

Over the years, more than 100 Sisters entered the Community from the now Altoona- Johnstown Diocese.  There are presently 15 sisters living in Greensburg who entered from the Altoona Johnstown area.  We would like to recognize some of these sisters each month as we approach our anniversary celebration at the Cathedral in Altoona on August 23.  Each month we will recognize a different sister from Altoona on Proclaim! E-News.

Sister Marie Clare Farabaugh was born in Altoona on June 16, 1924, the 13th and youngest child and third daughter of Sylvester and Anne McConnell Farabaugh.  On June 24, 1924, at her Baptism in Saint Leo Parish she was given the name Mary Louise.

Those who remembered Mary Louise when the family lived at 1906 13th Avenue described her as a tall, active, and energetic teenager who walked or ran swiftly and was frequently observed jumping over the hedges on her way to the store or an appointment.

Mary Louise attended Saint Leo Elementary School and Altoona Catholic High School until the end of her sophomore year when she petitioned to enter the Sisters of Charity of Seton Hill.  She described her parent’s reaction to her desire to enter as “overjoyed that one of their children would wish to enter religious life.”  She entered the novitiate of the Sisters of Charity on September 8, 1941, at the age of 17 years.

She received the habit of the Sisters of Charity in April 1942 and the religious name Sister Marie Clare.  She attended Seton Hill College (now University) and received a degree in Elementary Education.

Sister Marie Clare spent her early ministerial life teaching in the middle grades of the elementary schools staffed by the Sisters of Charity in the Dioceses of Altoona, Greensburg and Pittsburgh.  In early 1960, she taught in the Cathedral School in Altoona.

In the late 1970, Sister Marie Clare became interested in providing new life skills for the elderly.  After attending several workshops and summer classes, she worked in Therapeutic Recreation at Kane Hospital from 1980 until 1984 and at the Glen Hazel Regional Center from 1984 until 1988.  She served as Activity Director from 1989 until 1999 and volunteered in the Activities Department until 2011 when she moved completely from Saint Stephen in Hazelwood to Caritas Christi, the Motherhouse of the Sisters of Charity.  Her volunteer service continued in various ways at the Motherhouse.

Known for her outgoing and caring manner and her generous spirit, Sister Marie Clare was on hand to assist her sisters to move from one convent to another or to help to close a convent in an area where the sisters were moving from the school.  She spent much of her free time packing and cleaning for days at a time.

Today Sister Marie Clare is often first in the Chapel in the morning and is frequently walking through the halls greeting her sisters and always looking for ways to help.  She remarked when she petitioned to make her vows many years ago, “My religious life means more to me than anything that life could offer.”  She has repeated that saying as she has celebrated many jubilees through the years and now looks forward to joining her sisters in Altoona on August 23, 2020, to celebrate the 150th Anniversary of the founding of the community in 1870. 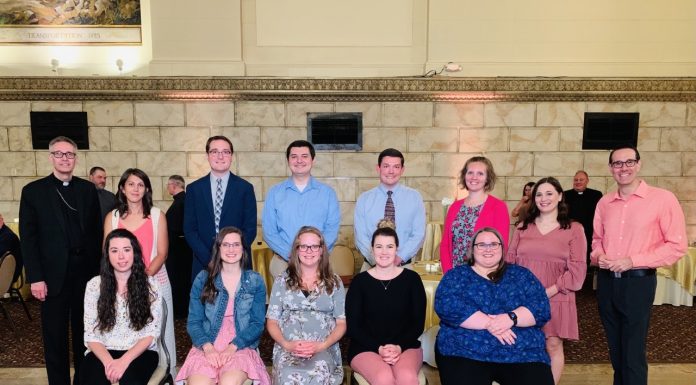