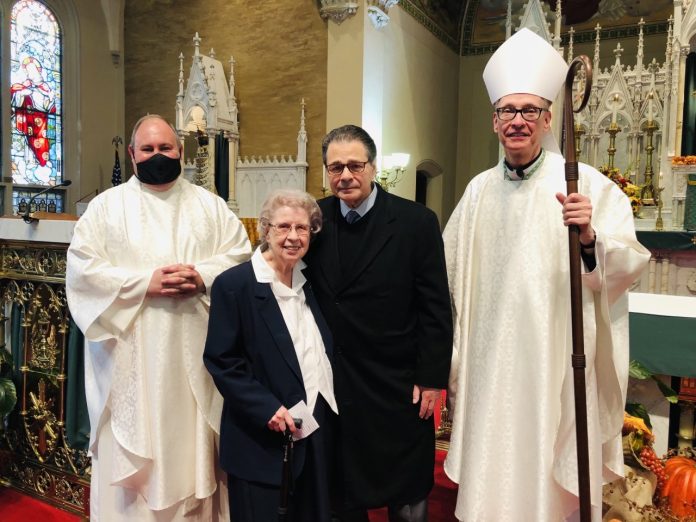 The beautiful new doors at the Basilica of Saint Michael the Archangel in Loretto are more than just an entry into the church. They are a reminder of the remarkable impact of Catholic education and a special bond between a teacher and her student.

Sister Evangelista Strohmier, RSM, taught Dan D’Aniello decades ago at a Catholic school outside of this diocese.

So powerful was Sister’s impact on D’Aniello that the two of them have stayed in touch over the years. 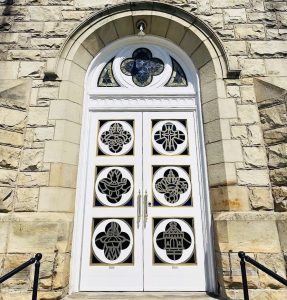 Sister Evangelista is a member of the religious community the Sisters of Mercy. Not long ago, she celebrated her 70th anniversary of religious life. To mark the milestone, D’Aniello and his wife, Gail, who reside outside of the Diocese of Altoona-Johnstown, gifted the new doors to the Basilica in honor of Sister.

“My first experience with Sister Evangelista was in the fifth grade, and I was just old enough to realize the impact she was having on me,” recalled D’Aniello. “One of the things I’ll never forget is she taught me the Latin Mass, and I’ve served Mass most of my life now. Then having her again as an eighth grade teacher reinforced all of those same good feelings and values. She was always focused on the welfare of students – putting them first. She became almost a mother away from home for most of her students.”

For Sister Evangelista, her decades in Catholic education – both inside and outside of the Diocese of Altoona-Johnstown – are a treasure.

“Working with children is amazing. The whole world seems to open up, and you meet these young people, you see what value they have, and what the future could be for them, and you want the very best for them, so you try to produce that in the classroom. It’s just a grand thing. It’s a happy time.”

Both Sister Evangelista and D’Aniello were undoubtedly pleased to witness the beauty of Catholic education in action during a pre-Thanksgiving Mass last month at the Basilica with Saint Michael School children present.

Bishop Mark presided at the Mass and, during his homily, acknowledged the presence of the special guests and the beautiful new addition to the Basilica. 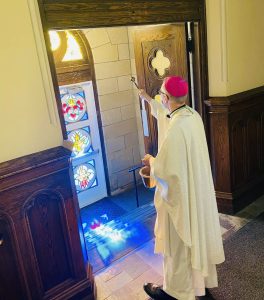 The Bishop later blessed each of the new doors, which feature images including the Mystical Rose, the Mirror of Justice, the Queen of the Most Holy Rosary, Our Lady Queen of Peace, the Gate of Heaven, and the Coat of Arms of the Servant of God Demetrius Gallitzin.

The Rector of the Basilica, the Very Reverend John Byrnes, summed up the spirit of the day.

“Mr. D’Aniello, we thank you so much for your gift. I hope that you see that we want to honor your special friendship with Sister, and we give thanks to God for your gift and your witness, which helps us to do what Sister has done for so many years: educate minds and hearts,” Father Byrnes said. “This really is a beautiful Thanksgiving lesson for all of us. It’s a thank you from a student to a good teacher, and that is a message that is very important for us.”

Sister Evangelista took a moment to publicly acknowledge her gratitude and salute the accomplishments and generosity of her former student.

“His strong ethics, intelligence, and untiring spirit has served him well throughout his life and allowed him to achieve great success in the field of business,” Sister noted. “He communicates through a manner of respect and dignity which enhances the cultural standards of all those with whom he comes in contact. Everybody benefits from what Daniel does.”

So as the faithful admire the new Basilica doors, D’Aniello will never forget the doors opened to him by Sister Evangelista and his entire Catholic school experience.

“A Catholic education gives you grounding in your own humility,” reminded D’Aniello. “The idea that there are values that transcend this earth allows you to accept the fact that what you do here is important but not ever as important as where you want to go. Our main purpose, which was enforced many times and in places over the course of my education, is really about what we can do to earn our way to Heaven. That kind of faith also radiates to other people in the context of how you treat them.” 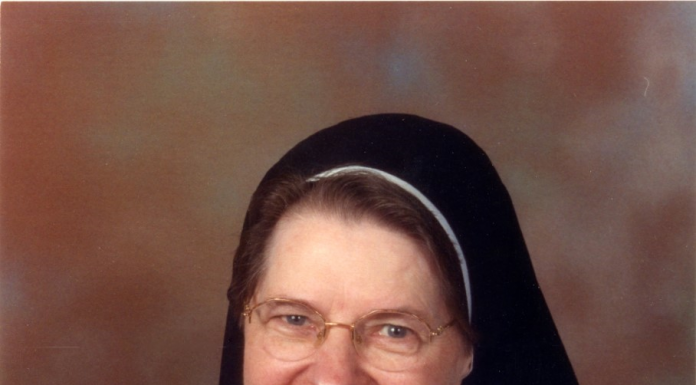