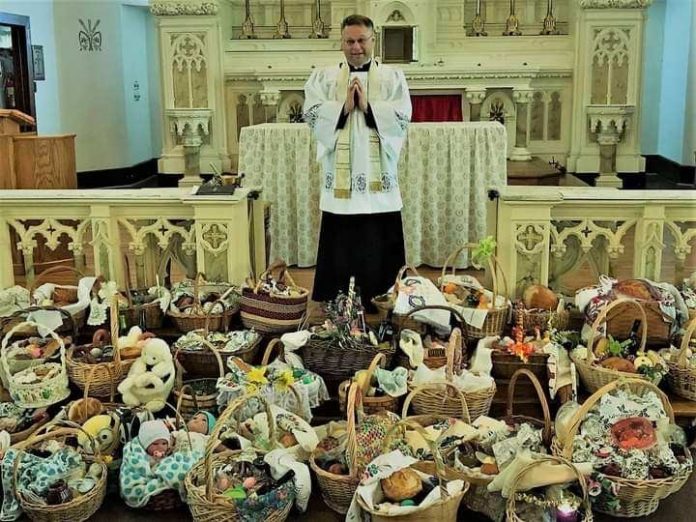 Easter is coming, and the mere mention of hrudka gets Father Aron Maghsoudi’s mouth watering.

Few people appreciate ethnic traditions as much as Father Maghsoudi, so that traditional Slovak Easter cheese is something he and his beloved grandmother cannot wait to savor.

Beyond that, it is just one element that makes up an important custom that remains cherished in many parts of the diocese.

On Holy Saturday, the faithful often make the trek to their parish for the blessing of Easter baskets or Easter food.

In Central City, where Father Maghsoudi is pastor at Our Lady Queen of Angels Parish, the tradition is huge.

“It’s a big deal,” Father said, noting that on a typical year, he blesses about 70 baskets.

“The idea behind the basket is that you have fasted throughout Lent, and now it is time to enjoy abundance,” he added.

So what items are contained in the baskets?

It varies based on ethnic backgrounds, but according to Father Maghsoudi, eggs are common, as well as breads like babka and paska.

“Eggs symbolize the resurrection, and the bread relates to the Eucharist,” Father explained.

A lamb made out of butter is also standard in some baskets, representing sweetness; salt symbolizing purification; and bitter horseradish reminding us that we always carry our cross in union with Christ.

Ham, good bacon, and kielbasa are often seen in the baskets, as well as cheese, such as hrudka.

Again, much depends on ethnic culture, which is rooted differently in various parts of the diocese.

“You would think it would be children’s Easter baskets, but it’s usually the items parishioners are planning to have for Easter dinner,” said Father Robert Reese, Pastor of Saint Joan of Arc Parish in Frugality and Saint Thomas Aquinas Parish in Ashville.

Father Reese plans to bless baskets and food at both parishes this year, as usual. It is a tradition that he also enjoyed at his previous parishes of Most Holy Trinity in South Fork and Saint Bartholomew Parish in Wilmore.

Breads or ham are among the usual items people bring for blessing, Father Reese said of his experiences.

At his parishes, the roughly 15-minute blessing service includes an opening prayer, readings, intercessions, and a blessing prayer. He then sprinkles the baskets that are lined up in the sanctuary with holy water.

“I think having the food blessed for Easter makes it more of a reflection of the time, the meal itself, and being with family – the sacredness of that and of Jesus and His resurrection,” Father Reese remarked.

“What you are doing is taking the fruit of your labors in a very conscious and deliberate way and offering it to God, who has offered us everything,” added Father Maghsoudi. “There is profound significance. I see my entire life as a gift, and I offer it to God, who in turn feeds me.”

The following parishes are among the ones offering Easter basket blessings on Holy Saturday this year, based on information provided by parishes to the Diocese of Altoona-Johnstown Office of Communications.

[Photo: Father Aron Maghsoudi, Pastor of Our Lady Queen of Angels Parish in Central City and Administrator of All Saints Parish in Boswell and Saint Anne Parish in Davidsville, stands amid dozens of Easter baskets which he blessed in a past year at his parish.] 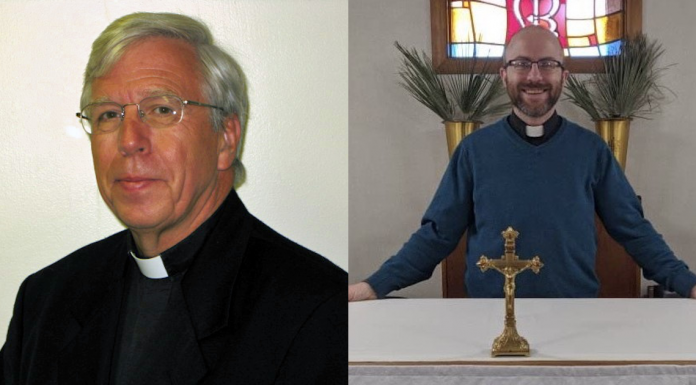