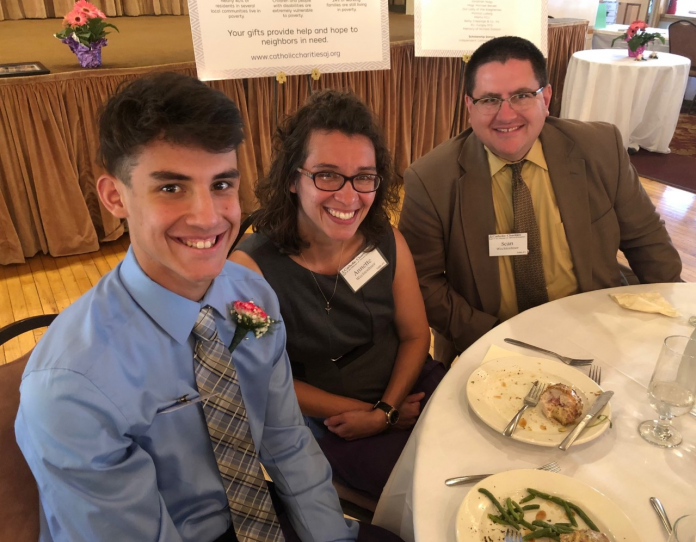 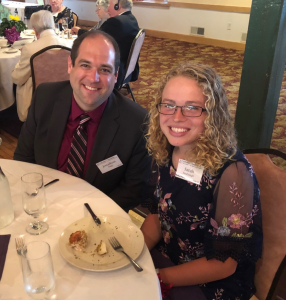 The familiar Bible message about the importance of building a house on rock versus sand is a guiding principle in Sarah Farabaugh’s life.

Meanwhile, when a task is perceived as too daunting to accomplish, Janet Haner has a reputation for being the person who can get it done.

“Yes, I am an instigator,” she conceded. “I have been known to do a lot of things that I can see the vision and a lot of other people had to be brought on board.”

Haner and Farabaugh represent two different generations, however they share a passion for their Catholic faith and a dedication to serving the Church and others.

It is no mystery, therefore, why they were among an inspiring group of adults and young people honored at the 2019 Catholic Charities Recognition Dinner.

Held on June 6 at the Casino at Lakemont Park in Altoona, the gathering highlighted the stellar mission of Catholic Charities, which includes serving the poor, marginalized, and vulnerable in our community.

“The truth is every single person is made in the image and likeness of God,” reminded Bishop Mark L. Bartchak in his remarks to the crowd. “That truth is restated in so many meaningful ways when the works of mercy are put into action by young and old alike. So many people in our world today are neglected or mistreated simply because there is a neglect to acknowledge and appreciate our God-given human dignity. From my perspective, the mission and practical efforts of Catholic Charities reminds us to never neglect that truth.”

Those recognized at the dinner represent a long-term commitment to carrying out that mission.

“Everybody can go out and do something one day, but the people you’ll meet tonight are people who have done it for weeks, months, and years,” said Catholic Charities Executive Director Jean Johnstone.

“These are your unsung heroes,” she continued. “These are the people who quietly go out and serve others without recognition, without being on the front page of a paper. They are people who truly live out the words of Matthew 25 (Amen I say to you whatever you did for one of these least brothers of mine, you did for me – Matthew 25:40).”

The Crones, members of Saint Thomas the Apostle Parish in Bedford, were founding members of the only Saint Vincent de Paul conference in Bedford. Lynne also supports the religious, charitable, and educational activities of the Saint Thomas Ladies Guild, which includes Birthright. She volunteers as an adult literacy instructor. Larry is the community director of the Saint Thomas Council of the Knights of Columbus. He also authored the children’s book Elephant on Deck and visits local libraries and public and private schools to donate his book and share his love of reading with the children. 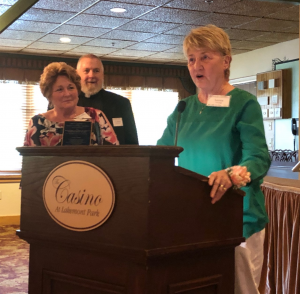 George has been part of the SVDP Society’s chapter at Our Lady of the Alleghenies Parish in Lilly since its inception in 2006, serving as both president and vice president.

An active member of the Our Lady of Victory Parish conference of SVDP since 2014, Haner has also served as manager of the SVDP Thrift Store in State College since 2015. She was the primary advocate in search of a new thrift store facility to increase retail space.

Newcomer is the high school Director of Religious Education at Saint Anthony of Padua, Saints Cyril and Methodius, and Saint Elizabeth Ann Seton Parishes in Windber. She leads retreats and coordinates annual trips to the diocese’s Senior High Youth Conference (SHYCON). She also directs the RCIA program, Baptismal preparation classes, and the ARISE Together in Christ initiative for the three Windber parishes.

Farabaugh was among five young people honored with the 2019 Matthew 25 Youth Humanitarian Award, which is presented to elementary and high school students for demonstrating exceptional service to their communities. The other winners were Seth Richardson, Brendan Veney, Ben Wechtenhiser, and Emma York.

Farabaugh, a member of Saint Nicholas Parish in Nicktown and a 2019 graduate of Bishop Carroll Catholic High School, is president of the Blessed Virgin Mary Sodality at Saint Nicholas. She spearheads putting together fruit baskets for older church members and shut-ins, and she recently launched an initiative to send cards to parishioners who are ill, in mourning, or welcomed a new baby. She is also a lector and cantor. Her service to BCCHS included the Student Ambassador Program, Student Evangelizer, and Liturgical Choir.

Described as someone who is always willing to help for the good of the community, Richardson, a student at Forest Hills High School, serves as a volunteer firefighter in St. Michael. He helps with cemetery clean-up and with youth at his church.

Veney is a familiar face at Resurrection Parish in Johnstown, where he is an altar server, lector, Extraordinary Minister of Holy Communion, and catechist. At school, he is the president of the Interact Club, a youth branch of Rotary.

A member of Most Holy Trinity Parish in South Fork, Wechtenhiser is an altar server, helps with Vacation Bible School, and a Religious Education helper. At Christmas, he shops and distributes gifts for the parish’s shut-ins, and helps with the Catholic Charities Christmas Angel Tree. At school, he is a member of the Jaycee/Jaycettes (raising money for the Cystic Fibrosis Foundation).

York is recognized as a teen who lives the Corporal Works of Mercy in her daily life. She has been involved with the Girl Scouts, mentoring younger girls in various skills and activities. She has led groups to clean up litter. Her other community projects include decorating Christmas trees at the Windber Museum, creating scarecrows to adorn Miners’ Park in the fall, and hiding Easter eggs for children.

All of the youth honorees are shining examples of young people putting their faith into action.

“It’s just a nice feeling to know that I’m helping everybody out when not very many other people are willing to do it,” commented Wechtenhiser. “I’d really like to stay engaged in our parish. It’s a smaller parish, so I’d like to stick around and help out especially since I still have younger siblings. As I get older, I’d like to continue serving our community as best I can.”

As he and the other teen winners look to the future, certainly the Griffin Award recipients can be considered amazing role models.

Newcomer has been working in Church ministry since she was 12 years old. It was something, she insisted, her generation learned at a young age.

[Third photo: Leona George offers comments after being presented with the Monsignor William M. Griffin Humanitarian Award. Looking on are Jean Johnstone, Executive Director of Catholic Charities, and Father Kevin Queally, TOR, Pastor of Our Lady of the Alleghenies Parish in Lilly.] 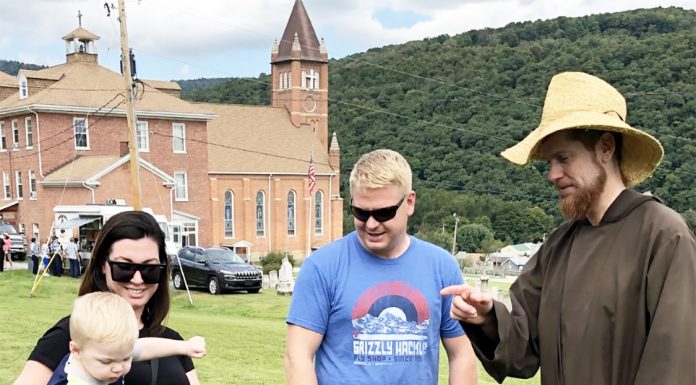