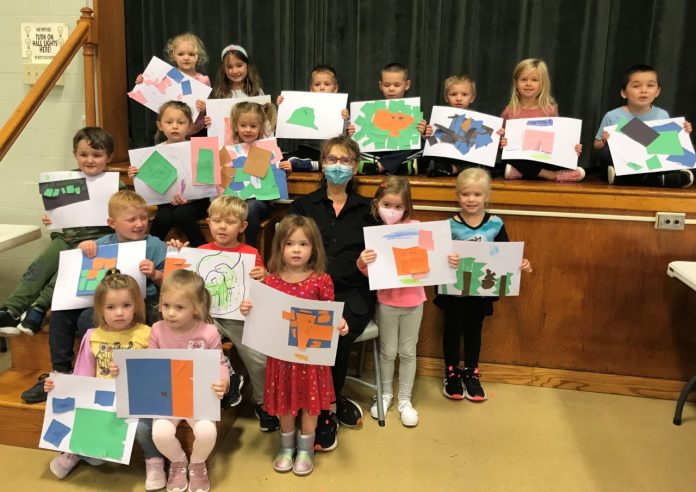 At first glance, tables surrounded by young students gleefully mixing paint, paper, bubble wrap, and twine appears to be a hodge-podge of color and confusion. Yet out of this joyous experience emerged works of art as individual as each child. Such creativity was the result of the Artist in Residence Program at Saint Matthew School in Tyrone which kicked off this year’s series with local artist, Laurie Cave. 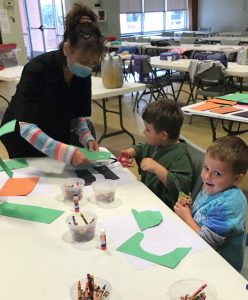 “I playfully call it Gonzo Art,” said Cave as she described the process presented to students from preschool age through grade six. “By using a variety of mediums each child has the chance to explore paint, paper, pastels, and three-dimensional items to ultimately create a mixed media collage. We discussed the components of a landscape or figure with all the grades for our initial work, but also challenged the older students to create a story of their own using the same techniques.”

Laurie Cave was Pennsylvania born into an artistic family and attended Ivy School of Professional Art in Pittsburgh prior to landing in Seattle where she learned welding and worked on ships for Lockheed. Returning to Pennsylvania, Cave illustrated, painted murals, and worked in interior design. Once settled in Tyrone, Laurie co-founded the Tyrone Community Players and worked with the professional roadshows that stopped at Penn State University.

In 1994 Laure was offered the opportunity to teach art at Grier School, an international boarding school for girls outside of Tyrone. Over the next 24 years Laurie led young women into all forms of expression in Visual 2-D and 3-D as well as Performing Arts, both in front of and behind the curtain. She also served as Department Head overseeing a program that consisted of five other artist educators. In her retirement, Ms. Cave continues to create original art out of her home studio, humorously titled Garage Art. 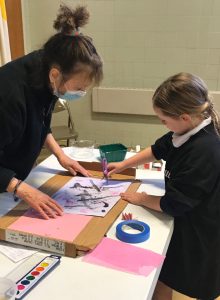 Throughout the three-day residency, students expressed their excitement about the opportunity to use their imagination. “I liked doing all of the painting. I just did what came to my mind,” exclaimed third grader Rory McManigal. “What I enjoyed most,” said Breyton Wright, “was learning new ways to create and having fun.” This was a sentiment shared by fourth grader Hannah Narehood who added, “I really liked being able to do whatever I wanted with all the materials.”

Inspiring the imagination is at the core of Laurie Cave’s philosophy regarding art and children. “The kids came in a little shy, a little curious and just wanting to look around at the different supplies. Over the course of time with just some demonstration on how to use materials without dictating subject matter, they just took off in all sorts of wonderful and imaginative directions way beyond what I was expecting. It has been a great three days for everybody.”

Even the youngest students felt the excitement of art fueled by imagination as expressed by preschooler Kenzie Simondale, “Look. I made a dolphin with a witch’s hat. This is so much fun!”

When asked what the best part of her time at Saint Matthew School was, “The hugs!” was Laurie’s immediate response.

The Saint Matthew School Artist in Residence Program has additional visual and performing artists scheduled with upcoming experiences in 3-dimensional sculpting, puppetry, and instrumental encounters. A week-long theater workshop will be held in December in partnership with the Tyrone Community Players and culminating in the performance of a Christmas musical on December 15. The public is invited to attend the performance as well as view pictures and videos from the workshops on the Saint Matthew School Tyrone, Facebook and website pages. 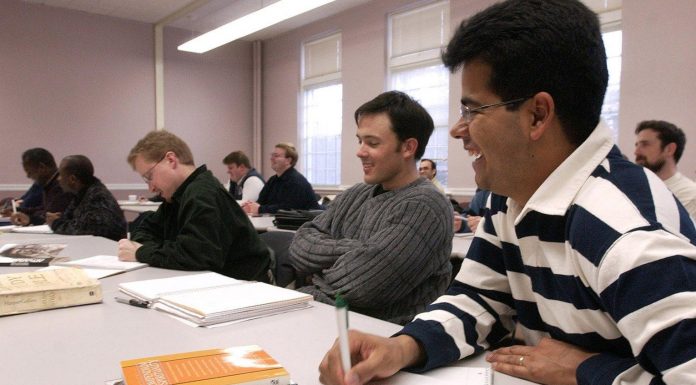