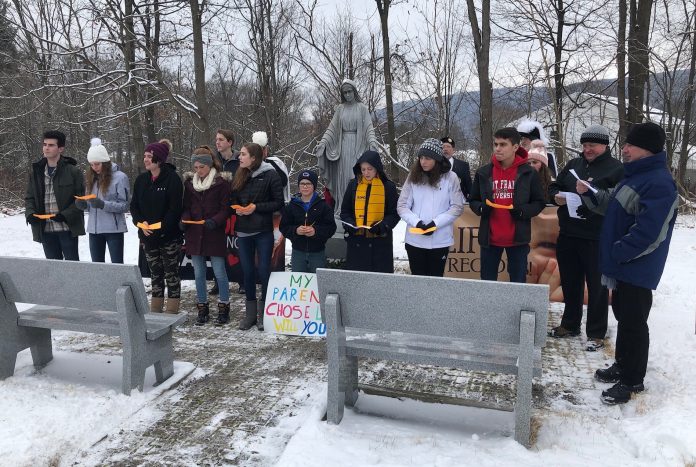 Lou Schmitt braved the snow and cold like the many others who attended the annual Respect Life March in Tyrone.

Certainly, the elements were not ideal, but for Schmitt, there was an especially personal reason to attend.

When his mother was pregnant with him, she was not married, and Schmitt said there was pressure on her to terminate the pregnancy.

“If it hadn’t been for my mother’s decision to choose life, I would not be here today,” he revealed.

One could guess that most of the others who turned out for the march do not have as powerful a story as Schmitt. Likely, they showed up because of the other factor that motivates Schmitt’s pro-life beliefs.

“My Roman Catholic faith has taught me that life begins at conception – that a heart begins to beat at the moment of conception and that when an abortion is performed that life is ended,” he added.

Sponsored by the Saint Gregory Council #1218 of the Knights of Columbus, the 32nd annual Respect Life March began with a prayer service at Saint Matthew Parish in Tyrone.

The faithful then walked more than a mile to Oak Grove Cemetery for another prayer service at the grave of Baby Agnes Doe.

The remains of the unidentified infant were found in the region in 1987. Months later, the Knights of Columbus were granted permission to give the girl a proper burial.

The Knights named her Agnes in honor of the patron saint of young girls and laid her to rest at the cemetery.

Every year since, the Respect Life March has been held.

This year’s event fell on Sunday, January 13 – the Feast of the Baptism of the Lord. It was an appropriate day, noted Peter Kreckel, the pro-life director for the Knights’ Saint Gregory Council.

“This was the beginning of Christ’s public ministry where He publicly stepped forward to tell us what we should be doing,” Kreckel said. “It’s good for us to publicly get out there and show our respect for life at all stages from conception to natural death.”

Kreckel’s wife, Denise, who assists her husband with the planning and hospitality, pointed out that many religious education students participated.

“It really opens up the awareness for them about the sanctity of human life,” she stressed.

Besides the students and a mix of people of all ages, several pro-life elected officials attended, including Schmitt, a new state representative from Altoona.

In his remarks, Father Jozef Kovacik, pastor of Saint Matthew Parish, urged those present to carry their pro-life commitment beyond that day’s march to the cemetery.

“It should not be just this walk that we will take today, but every moment of our lives, that we will bring life to the relationships we have, the friendships we have,” Father Kovacik encouraged. “Every place needs the life of God, so let us unite in this purpose.”

Indeed, celebrating the sanctity of life must be a priority every day, commented Gregory.

“Not just life at conception, not just life at the end of life, but the life in-between, trying to make sure that we’re recognizing people on an everyday basis,” he offered. “It’s by our actions, not just necessarily our words, that we treat people with respect and dignity.”

Following the march, the group gathered for lunch and fellowship in the parish hall. 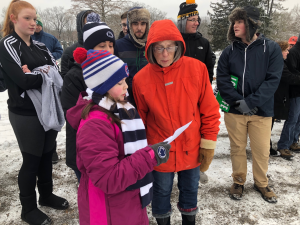 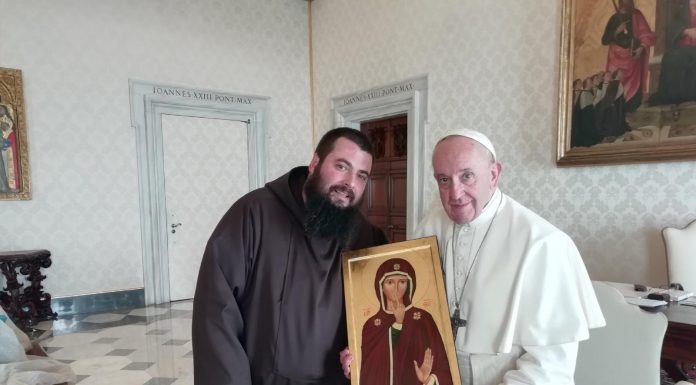 ‘Words Can Be Kisses,’ But Also ‘Swords,’ Pope Writes in New Book

Students Thank Benefactors and Celebrate the Blessing of Catholic Education