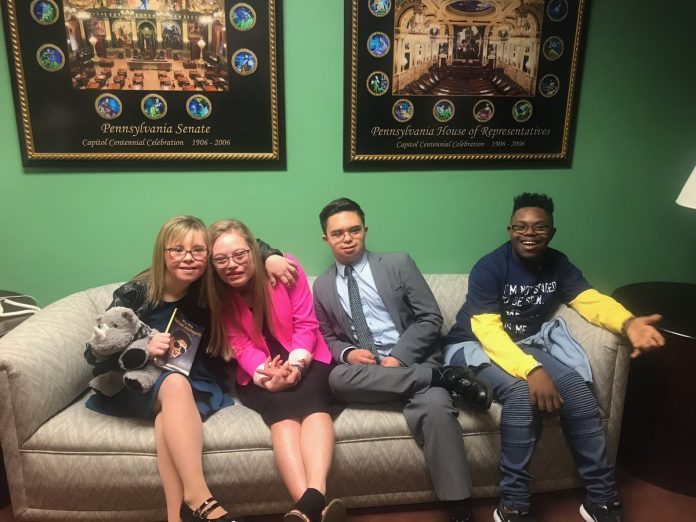 Twenty-four year old Mikayla Holmgren stood before a gathering at the State Capitol on Wednesday and basically defended her existence on this earth. Why would she—or anybody– ever feel the need to do that?

“This world is better with people with Down syndrome,” she said. “I have Down syndrome, but it will not stop me from a living a life with a purpose.”

Mikayla appeared at a rally at the Capitol Media Center to help support legislation that would restrict abortions that are based solely on a diagnosis of possible Down syndrome. You can’t blame someone like Mikayla for feeling a bit threatened by what has become a world-wide effort to eradicate Down syndrome. To counter that movement, PA Rep. Kate Klunk of Hanover is sponsoring House Bill 321, which would offer protection for unborn babies with Down syndrome.

“Today we stand with these perfectly imperfect individuals and support their lives and the lives of unborn babies with Down syndrome and those with a Down syndrome diagnosis,” said Klunk, who along with Rep. Kathy Rapp, chairs the PA Pro-Life Caucus.

Klunk, Rapp and Mikayla were joined at the rally and bill presentation by several other lawmakers, along with advocates and people living with Down syndrome. The Pennsylvania Catholic Conference was one of the groups that was honored to stand in support of the measure and stand behind the promise to push the bill forward despite what promises to be stiff opposition—mainly in the form of a promised veto from Governor Wolf.

“We are proud and honored to support Rep. Klunk, Rep. Rapp, Sen. (Scott ) Martin and other pro-life lawmakers in these efforts,” said PA Catholic Conference Executive Director Eric Failing.  “We must do everything we can to protect the most vulnerable among us, especially children with Down syndrome. Who, other than God is qualified to say that they do not deserve to live?”

“There is no justifiable or convenient excuse for aborting an unborn child diagnosed with Down syndrome,” said Rapp. “In Pennsylvania, we as pro-life legislators refuse to join the rabid rush that other states have chosen to eliminate our unborn children, some even up to the moment of birth and after.”

Also sponsoring the bill is House Speaker Mike Turzai, who pushed a similar measure last session. That bill attracted several co-sponsors and got bipartisan support but never made it out of the Senate.

“Now more than ever, babies with Down syndrome have the opportunity to live long, happy and productive lives,” Turzai said. “It is an important existential question that we each face. Who gets to decide what is a good life?”

Sen. Martin admitted that people supporting this legislation are staunchly pro-life. But he said this is about something that is more sinister than the question of life.

“This is about the practice of eugenics,” Martin said. He talked about Iceland’s efforts to fight Down syndrome– “how they were basically planting their flag in the ground and saying ‘we have eradicated Down syndrome.’ They were exterminating people!”

Martin wondered with all the pre-natal screenings, what lies next on the horizon for eradication–maybe the targeting of a diagnosis for a pre-disposition to cancer?

“Is that what we’re going to take up next–to spare this child of a miserable life in battling cancer? Where does it end?”

Several times Mikayla Holmgren put her arm around her much younger friend, Chloe Kondrich, the namesake for Chloe’s Foundation. It was started by Chloe’s father, Kurt Kondrich, to provide resources, support and assistance to children with Down syndrome and their families.

Kurt Kondrich talked about how his wife was pregnant with Chloe back in 2003. He said they were told that it was a high risk pregnancy and that they should get tested in case they wanted to do something about it. Kondrich was hearing none of it.

“Basically they’re telling people in these offices that you have an option to commit a prenatal death sentence to someone who’s completely innocent, who’s committed no crime and who’s done nothing wrong other than they don’t meet the cultural mandate for perfection.”

Or, as Sen. Martin put it, extermination.

We’ll keep you posted on what happens with House Bill 321. Feel free to encourage your senator, your representative and your Governor to support it. 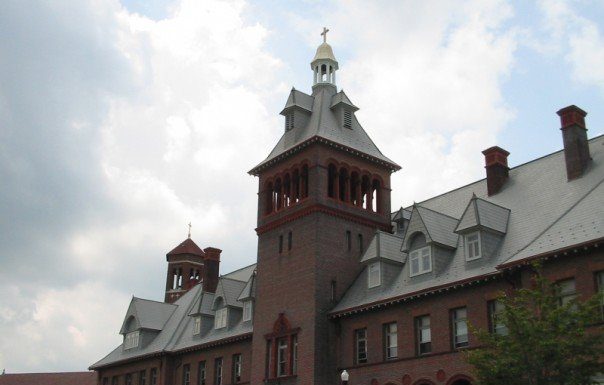 Only Risen Christ Can Bring Peace to World at War, Pope Says at Easter